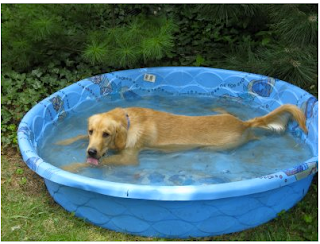 Definitions of “dog days” differ from source to source. In common parlance, “dog days” refers to the sultry days of late summer, when the dog star, Sirius, rises along with the sun. The online etymology dictionary notes that in Europe, the period between July 3 and August 11 traditionally has been thought of as “the hottest and most unwholesome time of the year.”

I am happy to say that we have not let the unwholesome DC summer weather defeat us. We are sweaty, but unwilted! Like the dog in this photo, we have remained defiant in the face of rising mercury.

Here’s a report from the trenches about what some of your favorite people have been doing lately:

Although the article has not yet been posted online, Washingtonian magazine featured GW Creative Writing Director Thomas Mallon in “Ghosts of the Past,” which ran in its July 2010 issue. “Infatuated with Washington,” goes the teaser, “Thomas Mallon gave up literary life in New York to live amid our stories and history.”

GW British Council Writer-in-Residence Howard Jacobson, who spent a snowy February with us in 2009, has just been longlisted for the 2010 Mann Booker Prize. This is the third time Jacobson has been longlisted; his 2006 novel “Kalooki Nights,” the subject of our 2009 Big Read, is his most recent book to have received the honor.

David McAleavey spent a month in residence in El Gouna, Egypt, on the Red Sea, where he wrote lots of poems. David has work forthcoming in Poetry Northwest, Denver Quarterly, Poet Lore, and even Modern Haiku, among others. A couple of short pieces have appeared in Divine Dirt Quarterly.

Holly Dugan‘s book manuscript on the role of smell in early modern culture has been accepted for publication by Johns Hopkins University Press. Congratulations, Holly!

Gil Harris‘s new book “Shakespeare and Literary Theory” is due out any second from Oxford University Press. Hey, wait, didn’t Gil just published “Untimely Matter in the Time of Shakespeare“? Oh yeah: that book comes out in paperback (from University of Pennsylvania Press) later this year.

Jeffrey Cohen attended a New Chaucer Society conference in Siena, Italy, where he organized two panels on “Touching the Past,” presented in a medievalist blogging session, and ate gelato. Jeffrey’s blog was recently cited in an Inside Higher Ed piece on the “medieval war” over Arizona. And did we mention that he was given much love in July by GW Today?

Chris Sten organized and chaired a panel and roundtable discussion on “Melville, Media, New Media: Appropriation, Adaptation, Remixing,” at the inaugural C19 Conference at Penn State in May. According to Chris, “the panel included everything from contemporary painting to a 3-minute YouTube version of “Moby Dick.”

Gregory Pardlo taught at the Callaloo Workshop at Texas A&M in May; read at the Brooklyn Public Library and at Summerstage in Central Park in June; taught workshops in New Hampshire in July, and will be reading at the New York Writers Coalition Fort Greene Park Summer Lit Fest in late August. If you’re in South Beach, check out The Betsy, a “boutique” hotel with copies of Gregory’s and (former Jenny McKean Moore Writer in Residence) Ed Skoog’s books in every room. You can check out his recent work here.

Margaret Soltan was voted first runner-up in the Harvard Club’s 2010 Bloomsday Reading in Washington, DC in June. Bloomsday, of course, celebrates James Joyce’s novel “Ulysses” with public readings. Margaret read from the chapters “Lestrygonians” and “Sirens.” She writes about it on her blog, UniversityDiaries.

In June, Gayle Wald presented her work at Humboldt University in Berlin; in July, she spent a hot day in her office being filmed for a forthcoming BBC/Antelope Productions TV documentary about Sister Rosetta Tharpe.

I mean that literally: the sound of air conditioners gets picked up by microphones, so our office a/c had to be off for the better part of 6 hours. Did someone say dog days?

Kwame Alexander’s And Then You KnowNew and Selected Poems at Gelman Library’s Special Collections Research CenterPoetry Reading and Reception On April 9 from 7 PM to 9 PM, the Special Collections Research Center of the Gelman Library invites the community to a poetry reading and reception celebrating the publication of Washington poet Kwame Alexander‘s And…

English Major Jessica Chace received a George Gamow Undergraduate Research Fellowship for the 2011-12 academic year. Like GW’s Luther Rice fellowships, the Gamow Fellowship supports an undergraduate researcher in ways that allow her or him to work closely with a Faculty Mentor.  The working title of Jessica’s research project is “The Humor Defense: Laughter as Therapy in Ken…

Here is a photograph of acclaimed British writer and public intellectual Howard Jacobson in warmer climes. Howard has been “in residence” since Monday, but the weather gods seem intent on making it impossible for us to hold any classes with him. But we will not be cowed by Snowpocalypse 2010. We are stronger than that.Show…

Please join us on Thursday September 17 at 4PM for our inaugural event of the 2009-10 year, a seminar entitled “Messianic Time and the Untimely” Three papers will be pre-circulated by email on September 1, and should be read in advance by all who plan to attend. On September 17, we will have short presentations…