Note this NEW course being offered by Prof. Jonathan Hsy this fall!
This course fulfills the pre-1700 requirement of the English major. 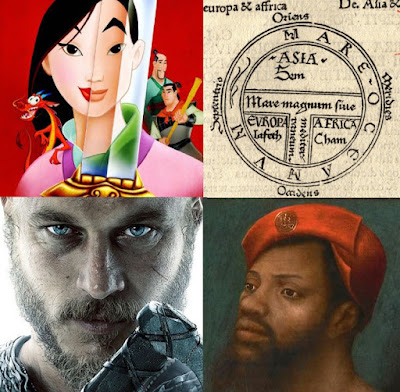 Vikings, Mongols, Moors:
A Global Middle Ages, Yesterday and Today
ENGL 3830.10 (CRN 15259)
Prof. Jonathan Hsy
Tue/Thu 9:35-10:50
Game of Thrones, Lord of the Rings, Merlin, Vikings, Harry Potter: in popular media, tales of conflict, romance, and magic set in the medieval past have an enduring appeal. What are the literary origins that gave rise to such forms of contemporary media? How do fantasies about the medieval past inform contemporary culture and global geopolitics?
This course will examine how medieval storytelling traditions shape popular media (including film and TV, visual art, spoken word poetry, and internet fandom communities). We will read representative works of medieval literature and discover how these texts inform present-day cultural issues as wide-ranging as religious conflict, ethnic identity, and the mysteries of love.
In our readings of medieval texts, we will approach the historical Middle Ages as a time of perpetual change. We will witness warriors, housewives, merchants, nuns, poets, pilgrims, intellectuals, and outcasts adapting to a world in motion and imagining alternate forms of life far from home. Major texts will include Beowulf, Vinland Sagas, Marco Polo’s Description of the World, Chaucer’s Canterbury Tales, The Book of Margery Kempe, Arthurian romances, and Shakespeare’s Othello.
Our examination of modern-day media includes the Game of Thrones and Lord the Rings franchises, and we will consider how the Western medieval past is appropriated across Anglo-American, indigenous, Jewish, Asian American, and African diaspora contexts.
Assignments include a close reading, review of a current form of media (such as a TV series, film, or graphic novel), and a final project that integrates literary analysis and adaptation theory.
No previous experience with medieval literature is required. All medieval texts will be provided in modern English (or bilingual) translation.
This course fulfills the pre-1700 requirement of the English major.

Spring 2012 is the first semester in which English will be offering ENGL 3965, a new topics course in Asian American Cultural Studies. Next semester, Prof. Patty Chu–known to many majors as our Director of Undergraduate Advising (she probably signed you up for the major!)–will be teaching the inaugural course under this new rubric.  As…

With the Republican debates taking up most of media’s attention in the month of November,  it seems fitting that GW should have its own debate—only,  this one wasn’t political. Students from both Prof. Holly Dugan’s and Alexa Alice Joubin’s Shakespeare classes took to the stage in a debate concerning the protagonist of The Tempest—the topic…

The Centre for Early Modern Studies is looking to commission twelve short pieces for this year’s postgraduate blog series. Each piece will be paid, of around a thousand words in length, and – in a material turn for 2021/22 – take a single object or ‘key thing’ as both its title and point of departure….