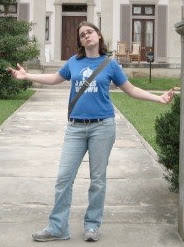 I suppose my “career” is the pursuit of a quirky, unconventional intellectual obsession. I’m technically working on my PhD in English at Duke, focusing on 20th c. African American literature and popular culture. Truth be told, those who know me best would argue I’m trying to get a degree in James Brown and Funk Studies — largely self-designed as you can imagine. I want to theorize a Funk aesthetic (beginning with Brown’s work in the late 1960s) and develop an approach to understanding both the music and the cultural moment in terms of a body of what I’m calling “funk literature” and the creation of an “Afro-Modernist” impulse. Funk is deeply philosophical, and I think it’s about time the genre, as well as its great innovators received a little respect.

Needless to say, I’m something of a maverick in my current department insofar as my pursuit of somewhat untraditional interests, but fortunately, I have the ooomph and vocab to back it up.

I probably wouldn’t be able to pursue my current project(s) had it not been for the support and enthusiasm I received as an undergrad from Gayle Wald. She certainly encouraged me to think critically about popular culture in the form of my undergrad thesis (again on James Brown–do you see a pattern developing?) and
various papers for her courses. But this support hasn’t come without consequences! Considering my interests and her encouragement, I think it would be professionally irresponsible not to watch reality TV and VH1 programming, among other televised guilty pleasures. I might have to start forwarding her my cable bills…

[The department chair adds: please wait to see if Shout, Sister, Shout! garners a lucrative movie contract. If it does, yes, forward those bills all you like!]

Writer and Activist Grace Paley Last Thursday, I had the opportunity to attend the screening of Lilly Rivlin’s documentary Grace Paley: Collected Shorts, as a part of Prof. Faye Moskowitz’s Jewish Literature Live course, which works to bring in Jewish authors to speak. The film tells the story of the life and work of Grace…

The Children’s Literature Association, or ChLA, is an organization devoted to encouraging high standards of criticism, scholarship, research, and teaching in children’s literature–a field more or less “invented” in 1973, when a group of professors set out to remedy the scholarly silence around–even embarrassment about–literature written for children. Every year the organization hosts a national…

English major and creative writing minor Gowri Koneswaran (class of 1997) writes: I’ve been thinking about the folks in the English department a lot lately! For the past four years, I’ve been working down the street at The Humane Society of the United States. For some of my non-creative writing, check out this article I…

Congratulations to MEMS PhD student Haylie Swenson for winning the Michael Camille Essay Prize! The prize was established this year and sponsored by postmedieval: A journal of medieval cultural studies, Palgrave Macmillan, and the BABEL working group. Her essay, “Lions and Latour Litanies in The Sketchbook of Villard de Honnecourt,” took first place out of twenty…