Here is a brief biography of Newland from the British Council website:

Courttia Newland was born in 1973 in West London to parents of Caribbean heritage. From a young age, Newland was fascinated with hip-hop and began his own record label. A love of music was followed by a passion for literature – at 21 Courttia began writing and in 1998 published 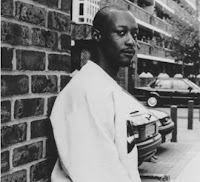 his first novel The Scholar. Courttia was immediately hailed as a master at highlighting the complex intercity life of multicultural London. “I write about people that have been left out of mainstream fiction. When I was first published I felt that these people had no voice, so I wanted to try and capture that,” stated Newland in a recent interview. British newspaper The Observer called his first novel “an absorbing debut from a writer who clearly has something to say.” Further critically-acclaimed novels followed, including The Society Within (1999), a collection of short stories about young black Londoners, and Snakeskin (2002), a thriller about murder, politics and justice.

Courttia’s career has also encompassed performance readings, short-story and playwriting. His plays include The Far Side and Mother’s Day, which premiered at the Lyric Studio Hammersmith in 2002. Newland is the editor of the anthology IC3: The Penguin Book of New Black Writing in Britain (2000) and has featured short stories in many other anthologies including The Time Out Book of London Short Stories and England Calling. Although known for writing about urban life, Newland’s bibliography also includes adaptations of Greek tragedies for the stage and scripts for the small screen.

Next year, the English Department at GW starts a British Council UK Writer in Residence program of its own. Watch this space for details.

A reminder — Nadeem Aslam, our first British Council Writer in Residence, will be reading from his work tonight at 7 PM in the Marvin Center Amphitheatre. Nadeem Aslam is the author of two prize-winning novels, SEASON OF THE RAINBIRDS and MAPS FOR LOST LOVERS. His third novel, THE WASTED VIGIL, will be published this…

Global Change through Shakespeare A TED-style plenary presentation by Alexa Alice Joubin Join us for a short, TED-style plenary on “Global Change through Shakespeare” during the Fulbright Association’s 42nd Annual Conference and Advocacy Day at 9:15 am, Saturday October 26, in Salon 4, Renaissance Arlington Capital View (Crystal City, Virginia). RSVP for a free ticket at…

The Hyman S. and Freda Bernstein Jewish Literary Festival begins this Sunday and GW English is pleased to note that our alum David Bruce Smith (BA, 1979) is on the “Local Author Fair” roster for his new book American Hero: John Marshall, Chief Justice of the United States.  John Marshall was the fourth Chief Justice…

English Department majors and minors: Has your course work or reading sparked a desire to pursue some research of your own? The Luther Rice Undergrad Fellowship program at GWU provides financial assistance and structured support. With a deadline in early December, now is the time to begin thinking through your ideas and preparing an…

Dr Judith Buchanan   4:00-4:50 pm, October 25, Phillips 629 Judith Buchanan In this illustrated talk Judith Buchanan, co-writer of and Shakespeare advisor to the forthcoming GSP Studios film Macbeth, gives an insider perspective on the film. Judith Buchanan is Professor of Film and Literature and Dean of the Arts and Humanities at the University…