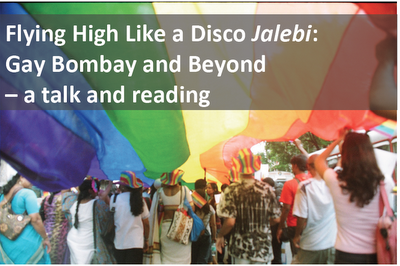 Flying High Like a Disco Jalebi: Gay Bombay and Beyond, a talk and reading

Parmesh Shahani is not your usual academic. He runs a newly formed corporate funded ideas lab that examines the nature of modernity in contemporary India. He also has a parallel life in which he travels all over India as Editor at Large for Verve, India’s leading fashion and lifestyle magazine, and tops lists like 2010 CNN list of “Mumbai’s coolest queers”. In his talk (accompanied by feature and documentary film clips), Parmesh will reflect on the changes taking place on the ground for LBGT people in India, set against the context of the larger national changes that the country is going through. Drawing on his ethnographic research within an online-offline gay community in the city of Bombay, Parmesh will mull over questions of identity, community and the national imagination. He will also read excerpts from his book.

Queer theorist extraordinaire Eve Kosofsky Sedgwick has died at the age of 59. I’ve been teaching her work since I came to GW in 1994. Though most of my graduate school friends were turned on to her work by Between Men and Epistemology of the Closet, my favorite of her early volumes was the second…

An alumnus of the GW English department, David Bruce Smith, recently donated to the faculty a copy of Tennessee, a deluxe edition of three plays by Tennessee Williams with six beautiful illustrations by Clarice Smith. The presentation is stunning. A large and elegant box wrapped in soft black leather and imprinted with gold lettering opens…

Department alumnus Keith Feldman writes: I’m pleased to report that I write you from my new office at UC Berkeley, where I’ve just begun a tenure track position in comparative ethnic studies. As you might imagine, I’m thrilled—and deeply humbled—by the opportunity to work in such a generative atmosphere. I was hired in part because…

I hope you will all join me in congratulating our new PhDs-all successfully defended their dissertations in the last couple of weeks. They are: Michelle Beissel-Heath, Matt Fullerty, Cathy Hamann, Almila Ozdek, Myra Remigio, and Niles Tomlinson. Well done, everyone! Tara Ghoshal WallaceAssociate Professor of EnglishDirector of Graduate Studies Share on FacebookTweet

Check out this alumna’s cool blog, and follow the link to her poem in Alive. Share on FacebookTweet