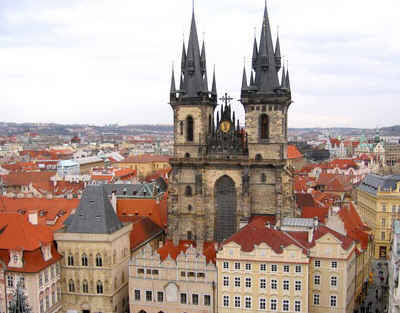 Most field trips for GW classes require a Metro farecard, but passports were necessary for 13 students in an English course this fall.

The class, “Transnational Film Studies and LGBTQ Cultures,” taught by professor Robert McRuer, went to the Czech Gay and Lesbian Film Festival in Prague, Czech Republic for a global approach to learning through lectures and discussions with Czech students. McRuer said bringing his GW class to the Eastern European country for eight days was the best way for his students and Czech students to increase understanding about human sexuality.

“I hope they had a once in a lifetime experience,” McRuer said. “I hope they come away from the course with a really sophisticated vocabulary about film and representation of sexuality in film, and a deeper understanding of transnational issues.”

Czech and American students were paired up each day during the trip to lead conversations on all of the films at the festival. The students based their three- to four-hour discussions on the festival theme of “survivors,” and tried to move progressive ideals forward.

“We started talking about the movie – talked about the director’s reasons for doing the film and how they affected our lives and our perspectives of them,” Hillary Richards, a senior, said.

Richards, who comes from a conservative area in California, said she had no experience with these topics before taking the course.

This course “helped me figure out how to approach the topic with people I know from home, and to see people for people instead of the lines we draw or putting people in boxes,” Richards said.

Senior Chloe Mayer, who said she has always been interested in human sexuality, said she became more aware of labels people put on each other during the trip.

“For me, it’s all gray, but it’s interesting how people talk about sexuality in general,” Mayer said. “The word ‘queer’ isn’t translated in Czech because it’s so new. It comes un-translated in English. Discussions about these issues are modified by American discourse.”

McRuer was scheduled to give a speech at the festival even before the study abroad office made the trip financially possible for the students – who largely paid for it themselves. He said the discussions in Prague incorporated a lot of the readings from the course, and that the students connected both academically and socially in the environment.

GW students attended presentations given by McRuer and his Czech counterpart, professor Katerina Kolarova, during the week.

McRuer gave a presentation on sexuality and disability in culture, which dissected how disability is represented in film. Much of his recent work has centered on this idea.

Although this class has not been taught at GW before, McRuer has tentative plans for next year as well.

“It has been very good for both universities,” he said. “We want to keep the transatlantic dialogue open.”

Prof. Patty Chu will be giving a lunchtime lecture titled “Narratives of Return: An Asian American Photographic Odyssey,” at the National Gallery of Art on Monday, May 17. The talk will be in the East (I.M. Pei) Wing, Small Auditorium, at 12:10 and again at 1:10. It runs 30 minutes, with time for Q&A. Here…

Brian Becker, one of my favorite former students, writes: I came to Chicago directly after graduation to get an MA in Humanities from the University of Chicago, which wrapped up in 2006, and have since been working in a number of capacities for The Princeton Review–most recently as a trainer of incoming teachers for the…

After having penned a cover review of Cynthia Ozick’s recent novel Foreign Bodies for the New York Times Book Review a little over a week ago, Prof. Thomas Mallon is featured in the latest New Yorker article, reviewing Jim Carroll’s posthumous offering, The Petting Zoo. Carroll, famous for his memoir The Basketball Diaries, was a…

Here is the full version of Jane Shore’s poem from her newest book with the same title. The poem was recently featured in Alan Cheuse’s poetry book review on NPR. For more details, look to Prof. Cohen’s post below. A Yes-or-No Answer Have you read The Story of O?Will Buffalo sink under all that snow?Do…