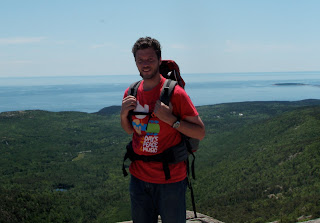 We hope you have enjoyed the Get to Know Your TA feature. This will be our third and final post in the series. It was a lot of fun getting to know these three TAs and we hope now that you have read the posts, you will feel free to stop by their offices for more than just discussing your paper for Myths of Britain.

Get to Know Your TA: Lowell Duckert

How many times have you walked through campus only to find a duck wandering around the bricked Kogan Plaza? Most students stare in befuddlement; clearly Washington DC is not hospitable to nature. However, Lowell Duckert sees it differently. “You can really find nature everywhere from the ducks on the Potomac to hiking the Billy Goat trail. There are degrees of nature always around us and acting on us,” he said.

Duckert has always been most comfortable in a nature setting. He grew up in the other Washington, Washington state. Duckert said, “I’m from the Northwest, where we tend to be much more conscientious. I never took the landscape for granted where I grew up.” Nature and the landscape are what motivate Duckert’s studies. “Whenever I go out into nature, there is much more of an interconnectedness I feel with the surroundings and that feelings is one that I am trying to theorize in my work in Early Modern studies,” he said.

Duckert has always been interested in English, but it took him a long time to discover his own voice within eco-critical studies. He received his B.A. in English from Western Washington University in Bellingham, Washington, where his family was. Although Duckert intended to go to graduate school immediately after getting his B.A., he did not get into graduate school the first time he applied. “It was probably a good thing for me to take that year off,” he said. “I thought maybe it was a sign I should not go to graduate school, but I just put a lot more effort in.”

After working at a community college in Bellingham for a year, Duckert was accepted into Arizona State University. Duckert’s sister had just moved to Arizona and although he appreciated having his family around and the great education he received there, he had to leave the state after his two years were finished. “I needed to get out of Arizona. I love green things and the outdoors, so Arizona was not for me,” he said. “The entire two years I was down there I sweated everyday.” Obviously Duckert did not just apply to GW for “meteorological studies” as he joked, but because GW was so welcoming. He said, “They were very accommodating saying ‘this is why we want you to come here’ and they gave me a mentorship.” So Duckert left Arizona for DC, starting GW in the fall semester of 2007.

Since he arrived at GW, Duckert has found his a love for eco-critical studies within Early Modernism. He studies “the interactions between nature and culture and then thinks about ways in which figures move through the landscape as much as by the landscape.” Duckert reads a lot of Sir Walter Ralegh and some William Shakespeare (such as The Merchant of Venice.) “I see the landscape as more of an actor and I am retheorizing it as well,” he said. “A lot of science and philosophy of science to kind of question that privileging of the subject over the landscape. I am trying to reinvigorate the green movement.” If Duckert’s research were to have a catchphrase it would be, “putting more movement in the green movement.”

Fittingly, Duckert enjoys camping and hiking as a pastime. He traveled to Maine last summer and just got back from a trip to the Mammoth Caves in Kentucky (yes, that is a twelve-hour drive from DC.) He attributes his research to his hobbies. He said, “I use my work to help me explore my own passion for nature and the outdoors. It is a symbolic relationship in itself, sort of eco-critical and it’s empowering–where nature takes me, not where I take it.” Duckert also explores nature through his pleasure reading of John Krakauer and other authors. Duckert is invested in all forms of art, however. “I love music, especially classical music and the opera. I used to go to the Met,” he said. When he is not listening to music, he is playing it on the guitar and harmonica. He also enjoys Shakespearian theater, of which DC has an abundance. You can find Duckert hiking or at the theater, but for now he is happily TAing at GW.

The graduate program here at GW has let Duckert find what really matters to him. For the past two years, he has TAed for Myths of Britain. “I will say that just going into a graduate program has allowed me to find my own voice and interest,” he said. “Teaching has developed in its own way. It reaffirms a lot of the reasons why I am here.” Duckert believes teaching empowers him and inspires him with a sense of gratitude. This fall he will teach his own class. “I feel like it is more growth and new experiences and new ideas and more of those moments of ‘this is why I do what I do,” he said.

On Sunday, April 19 at 7:00 pm, Sixth & I Historic Synagogue is hosting A.B. Yehoshua, one of Israel’s most acclaimed authors (Harold Bloom dubbed him the “Israeli Faulkner”). He will be reading from his latest novel, Friendly Fire, and discussing the book with Leon Wieseltier, literary editor of The New Republic. Tickets are $12…

ME: So, Mr. Very Famous Author, I hope that you are as excited to come to GW as we are to have you in residence this coming spring. FAMOUS AUTHOR: Indeed I am. ME: It’s a big deal for us, and we’d like to celebrate it. FAMOUS AUTHOR: I see. ME: I’ve been charged with…

Kathleen Rooney, a 2002 graduate, brings us much pride as a GW alum. Through my email exchanges with Kathleen, I have been continually impressed with how accomplished and gracious she is. Her thorough and insightful answers prove what a talented writer she is, and I’m sure many others will agree that we can all learn…