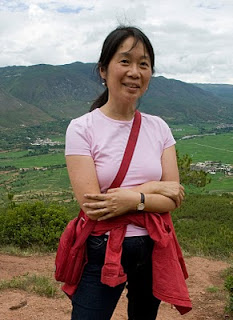 Every English major walks through her door at one point in their academic career here at GW. She had 208 meetings with students last year. In a sense, Prof. Patricia Chu could be seen as the gatekeeper to the English department. As the Director of Undergraduate Advising she meets with students to discuss majors, minors, and credit transfers. However when Chu is not meeting with students, she is also the department’s go-to professor for Asian American literature.

Asian American literature is now a staple in most major English departments, but when Chu was in graduate school at Cornell it was just being discovered. “I was in graduate school at a moment when there was funding available to create a course in cultural studies. So I studied Asian American Cultural Studies,” she said. She was able to teach a freshman seminar in Asian American studies and publish an article on Maxine Hong Kingston. Chu elaborates that the article explored Kingston’s take on, “the problem of creating a Chinese American self in opposition to heroines of romantic novels. The question of American and Chinese narratives of slotting women into marriage.”

Kingston was only the start of Chu’s love of Asian American literature. Now she cites Heinz Insu Fenkl, David Henry Hwang, Shyam Selvadurai, Lydia Minatoya, and Philip Michael Ondaatje as her main interests. However Chu’s writing is on more specific topics. She said, “My first book, Assimilating Asians: Gendered Strategies of Authorship in Asian America, thought of Asian Americans in terms of claiming Americanness. I argued that the process was different for women and men.”

Chu’s latest book-in-progress is much more personal. “It focuses on narratives of return,” she said, “and the cultural work Asian Americans do when they go to visit their ancestral homelands in Asia.” Chu has first-hand experience with this topic. As a second-generation Chinese American, she has strong cultural roots to China. However, when her parents left China after WWII they did not keep in touch with family. After her parents’ deaths, it was up to Chu and her siblings to track down their long lost relatives. “We’re in a process of figuring out how to have a relationship with people we’ve been out of touch with for decades,” she said. “During the Cold War and the Cultural Revolution they [Chu’s parents] could’ve gotten the family in China in trouble by sending money directly.”

Interestingly enough, Chu’s first trip to China was in 2007, a trip she finds essential both as professor and an Asian American. (Chu notes that many American-born Asian American authors tend to go right before or after the publication of their first book.) “I would call myself second-generation Chinese American, but your parents’ home country is deeply in your psyche,” she said. “Even though reality is different than what your parents told you.” She says she does not feel that out of place in China despite the changes in the country since her parents left. “My parents spoke Chinese to me when I was growing up. I feel kind of at home when I visit because I hear the language, I see Chinese people, and I like the food.”

However, Chu would like to make China feel even more like home, by reconnecting with her relatives. “I would like this reunion to somehow connect me with some aspect of my parents I never knew,” she said. “My parents did not talk much about their youths and childhoods. To see my aunts and uncles, it’s a second chance or compensation for my relationship with my parents.” Chu’s dream is already on course. On her first trip to China, she was able to contact her relatives two weeks into her time in China and was able to visit for long on her second trip.

Although Chu looks forward to keeping in touch further, she is still very much connected to the American part of her Asian American identity. Chu does not just teach Asian American literature, but Gender and Literature, a class that reads everything from American female slave memoirs to Gertrude Stein and Gloria Anzaldua.

When she is not teaching, she is busy reading the latest fantasy novels to her daughters, Eleanor (who is 13) and Sophie (age 10). Turns out she can discuss credit transfers and all of the Harry Potter or Tamora Pierce novels as well. So make sure to stop by her office for more than just declaring your major, for Chu loves to keep in touch with all students.

Chu will co-chair a meeting of the 19th Century American Women Writers Study Group at American University on Saturday, April 19.

The English Department is happy to be a co-sponsor of a reading/presentation by Ruth Franklin, author of A Thousand Darknesses: Lies and Truth in Holocaust Fiction, at the DC Jewish Community Center on Tuesday, October 19 at 7:30 p.m. The reading is part of the DC JCC’s Hyman S. and Freda Bernstein Jewish Literary Festival,…

Every year the English Department reports on its progress and achievements to the university. I thought readers of this blog might enjoy the glimpse it yields of the year that was. ————— CCAS Department Annual Report 2008-09ENGLISH IA Undergraduate studies * Majors, minors, double majorsMajors: 191 in English, 10 in English and Creative Writing; minors…

[action photo of blogging in motion by Nick Gingold] Follow this link to read a very good piece on why the English Department maintains a blog and Facebook page (short answer: we do it for you, the person reading this post, in the hope of community). Thank you, Calder Stembel, for writing a feature so…

You have likely been hearing a great deal about playwright Tony Kushner lately, as he is the screenwriter for Steven Spielberg’s new film Lincoln, starring Daniel Day Lewis.  Kushner rose to prominence two decades ago, when his play Angels in America: A Gay Fantasia on National Themes, won the 1993 Pulitzer Prize for Drama.  Angels…