Congratulations to our 2010 graduates! I h 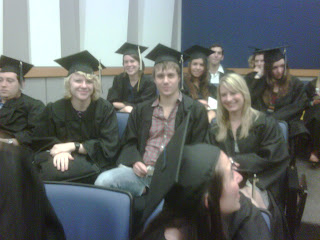 ad the pleasure of marching with students at Saturday’s CCAS Celebration, which went amazingly smoothly, given the challenging logistics. (In the photos posted here, we’re in Funger Hall, eagerly awaiting the call to march into the Smith Center.) Most people’s names were pronounced correctly, and there were photo ops galore: here, approaching the dais! here, as one’s name was being pronounced! here, as one accepted a rolled-up document from the Dean! My job was to greet each graduate and to give out the Columbian College medal, which resembles an Olympic medal except that it’s made of a cheap alloy. (But like the Olympic medal, its value cannot be measured in mere monetary terms.) And I set a new personal record for the number of “congratulations” consecutively offered. But really, it was quite thrilling to celebrate with everyone and to be part of the general gladness and cheer.

In the Smith Center, we were pleased to see 2010 graduate Samantha Barry, recipient of a 2009-10 Luther Rice Award for undergraduate research, and English P 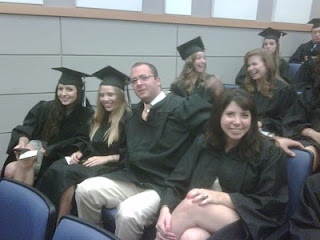 rofessor (and Associate Dean of Graduate Studies) Tara Wallace on the podium along with CCAS Dean Peg Barratt. And there was now-Emerita Professor Judith Plotz, leading newly minted English MAs and Ph.D.s in her crimson Harvard regalia, which featured a fine beret. Among this group were the department’s first class of BA/MAs: Carolyng Gomes, Scott Jacobsen, Landon Manjikian, and Rosemary Tonoff. Also marching was our former work-study student Sasha Moss, who is off to Scotland soon for graduate work in English.

Before the Celebration, English department faculty and staff feted our graduating class at a reception for stud 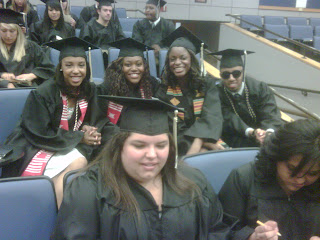 ents and their guests. Well over 100 people showed up, and were treated to spirited readings from (now ex-) seniors Laura Feigin and Carolyn Kerchof. Laura, who hails from Flemington, NJ, read William Faulkner’s Nobel Prize acceptance speech. She’s not finished with GW, yet, however; Laura will be staying on for our 5-year BA/MA program. Carolyn, who grew up in and is returning to work in Birmingham, Alabama, read a wonderful poem by the young South Carolina-born poet Terrence Hayes.

As I told the group of us gathered together in Phillips Hall, from the point of view of faculty, the best teaching experiences are also learning experiences. So thank you to all of our graduates for the privilege of teaching you, and for teaching us, during your four years at GW. Keep in touch!

Sassi Riar is taking Prof. Pollack’s Intermediate Poetry 104 class. Drawing a Line He had to crouch to sniff white.It took a toll on his posture,As if pulling him to the groundWhere he went after. His fingers, once colorful,Now pale from powder,Forgot all the notes they had played.Silence was louder. He picked at the strings…

The English Department is pleased to announce two job searches for this year. One is for the 2012-13 Jenny McKean Moore Visiting Writer-in-Washington, a creative writing position supported for more than 30 years by the Jenny Moore Fund. The genre of this hire changes from year to year. This year’s JMM Visiting Writer is Tim…

Every president should commence a term in office with poetry. The arts are too often separated from government, and for no good reason. Only two presidents have invited poets to read from their work during inauguration: John. F. Kennedy (Robert Frost) and Bill Clinton (Maya Angelou, Miller Williams). Good news: Barack Obama has likewise named…

To decorate our new lounge space, English has partnered with Project George’s Laura Van Biber and Elise Walker (both MFA candidates in Interior Design at GW). Here’s the plan they proposed. It includes seating for 7 people. Laura and Elise also helped us pick out durable, attractive, and inexpensive furniture that will add a bit…