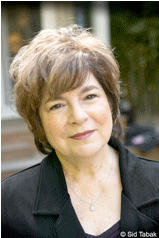 If you’re reading this and will be in New York on Thursday night, May 20, come cheer on GW creative writing Professor Jane Shore as she accepts the prestigious Poets’ Prize for her 2008 book A Yes-or-No Answer at the Nicholas Roerich Museum at 319 West 107 Street. The $3,000 prize is awarded to the best book of verse by an American in a given year. The Poets’ Prize is particularly special because the selection is done by other poets (hence: Poets’ Prize).

The prize motto? “We believe there is no greater honor than to be awarded a prize by a jury of one’s peers.”

A Yes-or-No Answer is Jane’s fifth book of poetry. Her previous collection, Music Minus One, was a finalist for the National Book Critics Circle Award. Jane has also won the Juniper Prize and the Lamont Poetry Prize. Look for an ad taken out by Jane’s publisher, Houghton Mifflin, to celebrate the award in Thursday’s New York Times.

An undeniable fact: the humanities are strong at GW. The English and History departments alone have well over two hundred majors, each. Both departments have a long history of graduating distinguished alumni. Both possess world class faculty whose research has taken their disciplines in new directions. Both are well known for their excellence in teaching,…

Former Jenny McKean Moore Writer in Residence Tayari Jones reflects upon literary traditions, finding one’s voice, and the work of black women writers: Black women writers of my generation must have a bravery that exceeds that of the women who went before us. Although they are said to have paved the way, I think a…

Professor and chair of the English department Jeffrey J. Cohen just presented from his book in progress at Hamilton College in Clinton, New York. His public lecture was called “Through a Monster’s Eyes: The Landscape of Postcolonial England.” An analysis of the strange case of two green children discovered in Woolpit (England) in the twelfth…