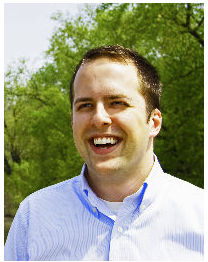 Lambda Literary bills itself as “the leader in LGBT [lesbian gay bisexual transgender] book reviews, author interviews, opinion and news since 1989.” The organization is also sponsor of the Lambda Literary Awards, or Lammys, the prestigious awards given every year to LGBT authors. The award honors writing in multiple genres, and recognizes works published by large and small presses alike.

On June 14, Lamba Literary featured “Five New Queer Voices to Watch” on its website. These writers have not (yet) won a Lammy, although the organization deems “undeniable,” up-and-coming talents.

One name on that list struck us: Michael Fauver, a 2007 graduate of GWU with a major in English and Creative Writing. Here’s what Lambda Literary had to say about Fauver, who was cited for excellence in fiction:

Going into his second year pursuing his MFA at the Iowa Writers’ Workshop, Michael Fauver has already won the accolades of residences at Yaddo and MacDowell, and writes a broad range of fiction and short stories. He’s currently working on Why I Won’t Remember Who You Were, a novel that combines elements of magical realism and historical fiction, set during the Cold War. In addition, he’s working on a series of surrealist short stories, including one about a mute opera singer, and another about gay air-traffic controllers. Rich with imagination and confident narration, Fauver is a fresh voice in new fiction.
When asked about the future of queer literature, his responses are thoughtful and optimistic. “I have mixed feelings about these kinds of [queer] distinctions,” he cautions. “I just think the future of literature lies, as always, with our most open-minded, fearless writers. I’m interested in what’s brave, queer or otherwise.” So, what’s on the horizon? Among other breakthroughs, Fauver concludes, “We’re going to see more humor and genre mixing, and we’re going to see more surrealism, magical realism, and science fiction. The sooner we as writers, gay or straight, embrace these wonderful modes, the sooner we can get down to the business of writing fantastic, courageous fiction.”

Here is an article the GW Hatchet published back in May 2007, when Fauver was spotlighted as an “intriguing senior” en route from GW to Yaddo, the renowned New York artists’ community. And here is a previous post from this blog, in Fauver’s own words.

At GW, Fauver was editor of Wooden Teeth, the University’s oldest literary journal. His novel-in-progress is the intriguingly titled Why I Won’t Remember Who You Were.

“What Does Asian American literature have to say about the issues raised by the recent discussion of Amy Chua’s book?” — This blog post is the third in a series by Prof. Patricia Chu. Read the first post here. Part Three:  Who’s afraid of the Wall Street Journal?  or, “I am the very Model of…

GW English’s fabulous alumni continue to win award and make headlines. The latest: GW PhD Dolen Perkins-Valdez is this recipient of a First Novelist Award given by the Black Caucus of the American Library Association. The award, which was presented at the Association’s recent San Diego meeting, honors Perkins-Valdez for Wench (HarperCollins, 2010). According to…