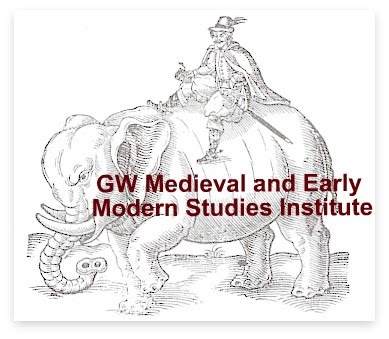 The GW Medieval and Early Modern Studies Institute aims to create an internationally renowned space to research the literature, history, and culture of early Europe, especially within a global framework. We foster ambitious humanities research that connects present and past. A joint initiative of ten GW faculty, GW MEMSI was founded with the support of twenty-two scholars from the DC area (Georgetown, AU, CU, UMD, the Folger Shakespeare Library and the Shakespeare Theatre). We now maintain an electronic mailing list of over one hundred names. The Institute is primarily focused upon research at the highest level. Monographs, essays in peer reviewed journals, and innovative doctoral dissertations are our most esteemed tangible outcomes. Yet GW MEMSI is also founded upon a principle of capacious outreach, especially towards undergraduates and scholars who do not work directly in medieval or Renaissance fields but who have much to gain through interdisciplinary, cross-time period collaboration. Simply put, while we aim to be a preeminent humanities institute, we also cultivate the next generation of field-changing researchers.

We wrote in our application for REF funding:

The first year will be devoted to allowing the institute to realize its full potential as catalyst to enduring community … We will hold four interdisciplinary research meetings, two each semester. These meetings will be traditional research paper presentations mixed with planning and community building. We will also sponsor visits by four scholars of international renown who work on topics related to the institute’s focus upon globalized early Europe. These high-profile visits have two objectives: to deepen the collective knowledge of the institute and refine its research aims; and to advertise the existence of the institute to scholars well placed to grow and disseminate our reputation … A small group of us will visit established Medieval and Early Modern Studies institutes at other universities in order to articulate a set of “best practices” [and] to learn about the challenges these successful institutes have faced, and what strategies they have employed to secure external funding.

We are happy to report that we have had a very successful inaugural year with the following results:

· Andrea Frisch, French, U Maryland, “The Poetics of Forgetting in Sixteenth-century France”

· David Wallace (Judith Rodin Professor of English at the University of Pennsylvania) “Writing after Catastrophe: Conceptualizing Literary History and the Boundaries of Europe, 1348-1400”

· Lytton Smith (Columbia University), “The Unending Medieval and the Edges of Poetry.”

· Stephanie Trigg (Professor of English at the University of Melbourne), “”Mythic Capital: Medievalism, Heritage Culture, and the Order of the Garter, 1348-2008.”

· Communities and Networks on the Margins (Stephanie Trigg, University of Melbourne)

· The Medieval Studies You Might Not Want (Carolyn Dinshaw, New York University)

The panel proved so successful in gathering information on best practices for medieval and early modern studies institutes that the money that had been allocated for site visits was used to send two affiliated graduate students to major professional conferences, where they presented their dissertation work in progress.

Visiting scholars and the circulation of ideas are the lifeblood of a thriving humanities institute. Through the inaugural symposium, the research seminars, and the Gateway Lecture series, GW MEMSI was able to bring eleven distinguished scholars to campus. We publicized and created forums for our work via sponsorship of professional meetings and sessions at conferences, and we contributed to the training and professionalization of our graduate students (about twelve GW doctoral and MA students are affiliated with GW MEMSI). The session we put together at Kalamazoo served the dual purpose of giving the institute wide publicity and allowing us to gather information about the budget process, administrative structure, and mission of medieval and early modern studies institutes at comparable institutes. We discovered that we have achieved more in our first year of life than many of these achieve in several years of operation. We did not obtain outside grant funding, but we will submit two more applications in this next year.

GW MEMSI faculty list the following as samples of published research from the past year:

Impact of the Institute on Faculty Research

Because humanities research advances through intangibles such as ideas and is refined through conversation and dialogue, it is notoriously difficult to measure the effect of innovative structures. When asked what the impact on their scholarship and research has been, however, GW MEMSI faculty offered the following:

We already have scheduled two high profile research seminars, one of which has a significant electronic component; two meetings of the work in progress seminar; and a fuller series of Gateway Lectures. The faculty affiliated with the program will form a subgroup dedicated to seeking and applying for external funding, with the aim of completing two funding applications by the spring. In the spring we will hold an interdisciplinary colloquium on “Europe in a Transnational Frame.” From this event will emerge the agenda of the conference to be sponsored by the institute in the 2010-11 cycle. We will begin looking into sponsored publishing ventures. We will also widen our membership to include GW faculty who were not involved in the original proposal. We feel that the Institute has become a vital contributor to the humanities research landscape at GW and would like to enable the participation of as many interested scholars and students as practical.

Prof. Thomas Mallon’s new book about Watergate appeals even to those born after Pres. Nixon’s 1974 resignation. “I don’t think that a leader can control, to any great extent, his destiny. Very seldom can he step in and change the situation if the forces of history are running in another direction.“-Richard Nixon“And Watergate? Well, I’d…

1. Go to this film, and thereby support GW English alumnus Jason Filardi. 2. Enjoy with some popcorn. 3. Tell your professor on Monday that the reason you didn’t get all your reading done is that the department chair commanded you to see an enjoyable film with popcorn on the side, and can you please…

Quick pop quiz (answer “yes” or “no” only):1) Are you a genius at saying things in 140 characters or fewer?2) Are you interested in what’s going on in the English department, in English courses, among English professors and students, and in the wider GW English community?3) Do you want to feel even more connected to…