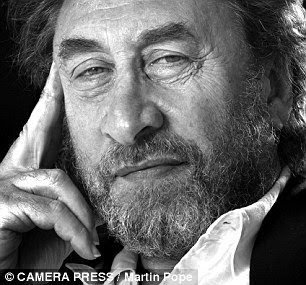 What is a joke? More specifically, what is a Jewish joke? I have a feeling the answer would vary depending on who you were talking to. The answers the Marx Brothers would give you would likely be entirely different than the answer Woody Allen would have. However Howard Jacobson’s idea of a Jewish joke is certainly unique. He maintains his books explore “where comedy dare go, I take it to the edge of the abyss,” he said. In some sense he feels an “aesthetic obligation” to be funny. However for him, funny is not where it is expected. He said, “The hard stuff where you’re almost in the grave…You make them laugh exactly where laughter is not to be expected and most difficult.”

As Jacobson explained at his reading at the DCJCC last night, people need humor to help them cope with tragedy, such as the Holocaust. In his novel Kalooki Nights, the protagonist, Max Glickman, finds himself forever scarred by the reading of a book about the horrors of Holocaust during his childhood. Jacobson described Max and his friends as, “marked and even marred by the reading of this book. Can you be a victim of the Holocaust when you had nothing to do with it?” he said. The book examines how Holocaust functions in memory. Jacobson asked, “At what point does one stop remembering? What do we owe to memory?” he said. He believes that language can contain some of our most important memories, and to him, Yiddish is the language to unlock the memories of the Holocaust. He said, “Yiddish is one of the ways in which we will not forget.”

While Jacobson discussed the Holocaust he read several selection from Kalooki Nights about Max’s father and Max’s one and only Jewish wife. However, the most intriguing portion of the night came during the Q&A. GW has been lucky to host Jacobson this month, but for the most part we have never seen him interact with someone off campus. Therefore I was curious to see what the diverse DCJCC crowd asked. The crowd was fascinated by the distinction between an American Jew and an English Jew. Jacobson explained it by noting, “American culture is still in the state of being formed. The wax is still wet, there is still room to impress upon it. Whereas the book is always closed on English culture…The culture is sorted and settled and its Anglo-Saxon. Mostly protestant, a little Catholic, but not much and no room for Jews, Italians, or others,” he said.

Naturally, the state of antisemitism is also different in England. Jacobson said, “It is the temperature of antisemitism that tells you what is going on. What tells you about a culture is what you can, with a degree of impunity, say.” Jacobson purposely writes for the Independent, a paper that is not always sympathetic with his viewpoint, because he would rather write for those who do not already agree with him. He admitted that his reading of antisemitism can be more stringent than others. “When I say something is antisemitism, many Jews would say it is not. They would just say it is anti Israel,” he said. Jacobson does not believe antisemitism today is a new form of it, but rather an old antisemitism being dragged up. In some sense, he does not think antisemitism will ever disappear. He said, “Some where or other, at the back of other people’s mind is a strangeness about Jews,” he said. “It is built into Christianity. Christianity defined itself against Jews.”

On that note, it should be noted that there will be a screening of “Creation” (2009), Jacobson’s documentary about the Book of Genesis, a production of Channel 4 in Britain. The one-hour film will be followed by talkback with Howard Jacobson and Roger Bennett; 5-7 p.m. Betts Theater, Marvin Center this Sunday. C0-hosted with Judaic Studies.

Former Featured Alumnus Michael Fauver has a new blog, named after his book in progress Why I Won’t Remember Who You Were. Check it out. Share on FacebookTweet

I was so pleased to receive an email from Michael Bonett, Jr., my former student and advisee in the English Department. He writes: After I graduated from George Washington University, I worked in Maryland for a year. During this time, I got published on my birthday in Mindflights magazine. I left to be a Peace…

T. S. Eliot grabs the open mic to read the swingin’est “Waste Land” ever Lenthall House (606 21st Street, b/t F&G)  Thursday, Dec. 1 at 7:30 p.m. Refreshments will be served.  Sign up for a slot (5 mins.) on the sheet in the English department office (Rome 760).  Poets, prose writers, dramatists, screenwriters all welcome!…

If you have been to a GW basketball game or a rained-out Fall Fest, you probably recognize the name Smith. “Smith” might be the most common surname in the United States, but it also has an illustrious history at GW. The Smith Center is named after D.C. real estate developer and GWU benefactor Charles E….