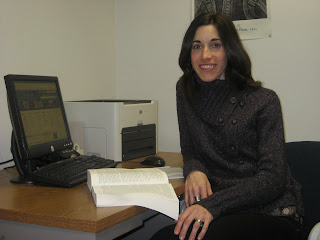 Do you ever wonder who is sitting in the front of the room taking attendance? Who is the TA leading your discussion section and grading your papers? As part of a new feature on the GW English Blog “Get to Know Your TA”, we will be interviewing the three Myths of Britain TAs Jessica, Nedda, and Lowell.

Get to Know Your TA: Jessica Frazier

As we struggle through a Charles Dickens novel for class, sometimes we wonder if it is relevant for our future. Not only did Dickens enrich Jessica Frazier’s college experience, but it helped her get her first post-graduate job in Florida. After graduating from Furman and getting married, Frazier found herself amongst the cubicle crowd working as a technology writer for technology manuals for mortgage software. “They asked me if I could track detail and I said, ‘Have you ever read a Dickens novel? There are long sentences, you have to track detail.'” she said. Surprisingly Frazier was surrounded by fellow English majors in her office. “We had bookclubs,” she said.

Although Frazier enjoyed the three years she took off when she lived in both Florida and San Francisco, California working everything from tech writing to retail, she was ready to go to graduate school. She said, “I always knew I wanted to be doing this, but I did not take a linear route.” Frazier got her M.A. at American University, studying how fashion worked in literature such as Milton and female poet writing in the same time period. “Clothing in the newspaper and novel all developed at the same time and it coupled with the Milton paper. It was an organic process,” she said.

Frazier took this interest in fashion to GW as well. Currently she is working on a paper about French fashion and diamonds. On the surface Philip Massinger’s play The Renegado is about a Venetian who falls in love with a woman from Tunis, an area controlled by the Ottoman Empire, but when he returns he is considered French. Naturally, the paper involves a lot of research about relations between the Ottoman Empire and England. “The Ottoman Empire and India and Britain had a certain history,” she said. “Part of the research for this paper is on diamonds. Diamonds were only known to be in India.” Frazier has a real love for research and teaching, but her love of literature and fashion is found outside of her studies as well.

Frazier has always been passionate about literature. “I believe we read for different reasons and at different moments,” she said. She describes her family as a “literary tribe” and finds that the moments she remembers from childhood are the ones involving sitting down with a book. The first book that really influenced her was Emily Brontë’s Wuthering Heights. Next Frazier found herself reading Persuasion by Jane Austen every year, she is moved by the “control” exhibited in the novel. Frazier loves British literature and has read everything from E.M. Forester to Kazuo Ishiguro, and of course, Dickens has a special significance to her. “I am constantly amazed at Great Expectations. It is an incredibly complicated and well wrought book.” She also appreciates the short fiction she finds in The New Yorker.

Literature is not the only art form however, Frazier also follows fashion. “I am absolutely intrigued by fashion,” she said. “My guilty pleasure is Project Runway.” She believes that fashion is a way to “construct our identity from moment to moment and day to day.” Frazier tends to follow both the New York and Paris runways, finding them “powerful and mesmerizing.” She admits to admiring couture, but notes she does not wear it. She said, “I have a practical side. I try to infuse an artsy side into my wardrobe.”

When Frazier is not at GW, you can find her in the Palisades neighborhood. “I spend a lot of time running and walking around. It’s a very community oriented place,” she said. She also admits to being a foodie and has restaurant recommendations for anyone who wants to ask. Some of her favorites include Tryst, Teaism, Komi, and the Dupont Circle Farmers Market. She still loves the humble coffeehouse, as any reader will tell you, there is nothing better than spending a day at a cafe. “I have a cup of coffee and just read. It’s isolated enough and just plugged in enough.”

Now that you know more about her, make sure to stop by at office hours to discuss the latest runways (it is Fashion Week right now), your favorite restaurants, and Dickens. But she can help with Marie de France as well!

The summer has flown by, like it always does. As I arrived at the office this morning, I saw students wearing bright yellow “Volunteer Movers” t-shirts, and I noticed a bit more traffic in the Academic Center elevators. (One benefit of summer: press “7” and you get an uninterrupted ride to the English Department.) Personally,…

I believe I was born to blog (is this a good thing or should I have higher life aspirations?), but as much as I love this job I must acknowledge that there were many amazing English bloggers before me. Rajiv Menon was one of them, and if his post-blog future is any indicator, I should…

The last Medieval and Early Modern Seminar of the semester will be held on Friday, November 30th from 9-11 AM in Rome 771. Jehangir Malegam (GW History) will be presenting his paper entitled: No Peace for the Wicked: Conflicting Visions of Peacemaking in an Eleventh-Century Monastic Narrative As usual, please RSVP to me to receive…