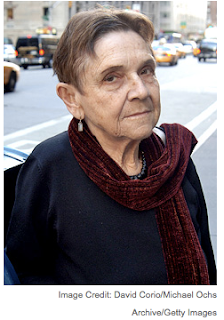 Recently Prof. Robert McRuer was interviewed by “Pushing Limits,” a radio show by and for people with disabilities produced by KPFA in Berkeley, California. The show airs twice monthly in the Bay Area and is available as an online broadcast.

The segment in question, which is available for listening here, focused on influential American poet Adrienne Rich, who died at age 82 last month. Both before and after her death, Rich was heralded as a ground-breaking poet for whom art and political consciousness and conviction were ineluctably intertwined.

In the segment in question, Prof. McRuer talks about Rich as a lesbian feminist poet who also contributed work that was foundational for a generation of disability studies scholars. McRuer’s own groundbreaking book, Crip Theory: Cultural Signs of Queerness and Disability, bases its influential coinage “compulsory able-bodiedness” on Rich’s 1980 essay “Compulsory Heterosexuality and Lesbian Existence,” originally published in the journal Signs but available here through Google Scholar.

Andrew Kozma “GW was the place where I first dreamed myself as a writer.” GW English and Dramatic Literature Alum and poet Andrew Kozma recently had one of his poems selected for inclusion this year in The Best American Poetry.  Professor Margaret Soltan caught up with Andrew to talk about poetry and pedagogy, and about…

Raising High & Waving Goodbye: Jordan Hutchinson, a 2021 GW English graduate, is currently working as an Editorial Intern for the New Jersey Digest (thedigestonline.com) and she will be putting out regular articles through mid-May. She has also written an article in the first ever physical copy of the Digest, which is linked on their website! …

GW English Professor Margaret Soltan has provided some commentary for Newsweek on the Martin Shkreli case.  Shkreli gained notoriety this year for dramatically increasing prices (by more than 5,000 percent) on life-saving drugs one his pharmaceutical company gained the license to those drugs.  Shkreli is now facing criminal charges related to fraud and tried to…

… on the birth of Zachary Adam yesterday morning. GW class of 2029! Share on FacebookTweet

GW English alumnae Jennifer Nelson recently published the anthology Deaf American Prose with Gallaudet colleague Kristen Harmon.  The collection is the first in a series called the Gallaudet Deaf Literature Series and promises to be a rich perspective to explore.  Professor Harmon is an English professor and on loan as the Center Manager of Impact on Education and Disseminations for VL2, a…