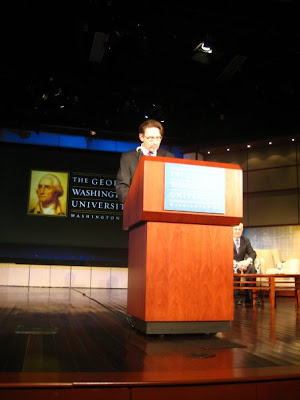 First, THANK YOU to all of our readers who attended the Edward P Jones Inaugural reading last Thursday.

The previous evening I had had a nightmare in which the only people in attendance at the event were me, Edward Jones, Steven Knapp, and the English department secretary. I imagined that President Knapp would be so angry he would yell “COOOHEN!” in that same voice that Superintendent Chalmers uses on Principal Skinner in “The Simpsons.” You can imagine how relieved I was that the Jack Morton Auditorium was standing-room only … and that the reading itself was so great.

Below you will find my introduction of the GW President. You will note that I refrained from calling him by his nicknames of “Knappybaby,” “Steve-o,” and “The Knappster,” saving those for behind his back use.

Enjoy … and again, thank you for participating in a great night for English.
——–

On behalf of my colleagues in the English Department, welcome. I am Jeffrey Cohen, the chair. I am so happy to have you join us tonight.

I am currently in the third year of leading the English Department. Shortly after I took office, we agreed on a mission statement that foregrounds our commitment to teaching and researching literature within as capacious a frame as possible. Thus my department boasts strengths in the diverse literatures of the British archipelago, and American literatures that include Jewish, Asian, and African-American. I believe that tonight’s event is intimately related to this mission, and am so grateful for the funding that made it possible.

I could not be more pleased than I am right now, standing on the same stage as Edward P Jones (who has been a terrific addition to the Department) …. and as Steven Knapp, whom it is my pleasure to introduce.

You might not know this, but president Knapp works for me. I’m the chair of English, he has a PhD in literature and so his tenure in my department … and therefore I actually run this university. (Though I haven’t really been able to convince anyone else of that fact.)

I am grateful to President Knapp for four reasons:

It is my pleasure to present to you this evening literary scholar and university president Steven Knapp.

We love having our accomplishments and our ambitions publicized. This kind of story, though, we would be happy to do without. Share on FacebookTweet

Rachel Malis graduated GW last spring, and she’s currently celebrating the publication of her poem “Odessa, Odessos” in the online journal damselflypress.net. In light of this new achievement, we caught up with Rachel to see what else she’s been doing. When did you graduate GW? What was your major?I graduated from GW in the Spring…

You may have heard that David Bruce Smith generously funded an undergraduate course taught by Faye Moskowitz. “Jewish Literature Live” brings the authors of books into the classroom to interact with GW students. What you may not know is that it’s not just the students in Professor Moskowitz’s course who benefit. Three of the authors…

Today I’m reposting information about Prof. Jeffrey Cohen’s ENGL 42W: Myths of Britain course for fall 2010. There are still spots left in this class, which meets twice weekly, once for a lecture and once for a break-out session. The class fulfills the English Department prerequisite, and it also satisfies Humanities and WID general curriculum…