Although you wouldn’t know it from the mild manner of those of us who inhabit Rome 760, the English Department has been quite busy lately.

Last week, in addition to seeing the completion of the construction work on our new department lounge, we hosted Prof. Karen Tongson of USC, who gave a well received presentation about her new book, Relocations: Queer Suburban Imaginaries. In various case histories centering on the part of Southern California sometimes dubbed “Lesser Los Angeles,” Tongson explores the ways in which queer lives and queer sensibilities flourish in suburban spaces. Part of Tongson’s project is to pose a challenge to queer cultural theory, in its privileging of urban spaces as the spaces of queer identities, as in its perpetuation of the all-too-familiar story of queer migration out of “provincial” spaces and into urban spaces. The suburbs, as Tongson reminds us, are also inhabited by migrants of color who have “relocated” to the United States. As we know from the suburban strip malls of northern Virginia and Montgomery County, Maryland, the suburbs are crucial spaces for thinking about diaspora, including queer diaspora.

Two members of the GW English community (full disclosure: I’m one of them) were also in the news this week.

On Tuesday, October 24, Gayle Wald attended a ceremony in North Philadelphia to unveil a historical marker at 1102 Master Street, the last home of the gospel crossover superstar Sister Rosetta Tharpe. The marker was the idea of local entrepreneur Bob Merz, who worked with Girls Rock Philly to raise money. The small but joyful event was the culmination of various efforts to bring to public attention the career and legacy of Rosetta Tharpe, an American musical treasure. 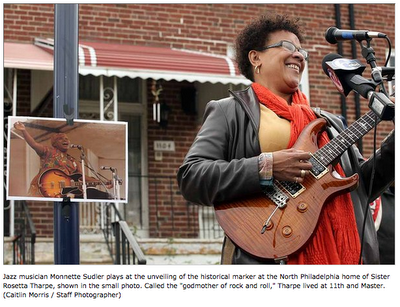 Today, English PhD student Tariq Al Haydar published a blog post in The Atlantic on women in Saudi Arabia. Tariq, a novelist, is also an English lecturer at King Saud University, one of leading higher research institutions in the Middle East. You can follow him on Twitter at @TariqAlhaydar

Congratulation to Tariq for this notable publication!

This upcoming spring, two GW English PhD candidates will be teaching a series of unique classes that will be of particular interest to our undergrads. With registration just around the corner, now is a great time to learn about the special topics these classes cover! Maureen Kentoff will be teaching ENGL 3840.11- Women, Place & Time…

After many years of teaching and service here at GW, Maxine Clair will be retiring. The department’s recommendation that she be awarded emerita status in honor of her achievements has been accepted. We are so very proud of Maxine … and we would say that we will miss her, but we are confident that we…

All friends of the GW English Department (and if you are reading this, you are our friend) are invited to the FINAL EDWARD P. JONES READING AT GW The event will be held not in a cavernous auditorium, but a comfortable room in the Academic Center Wednesday April 22 at 5 PM Phillips 411 one…