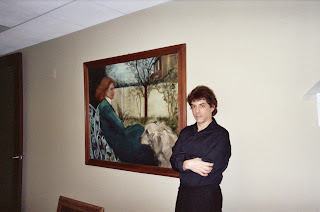 David Bruce Smith, an alumnus of GW’s English Department, has published a new book entitled Three Miles from Providence: A Tale of Abraham Lincoln and the Soldier’s Home. The book is written for the National Trust for Historic Preservation. Its publication coincides with the completion of the refurbishment of Lincoln’s Cottage in Washington, DC where Abraham Lincoln and his family summered. The president also composed a draft of the Emancipation Proclamation there.

Three Miles from Providence is the fictional diary of Elliot Q. Burdette, a soldier charged with guarding Lincoln during his time at the cottage. The book begins with a letter from Burdette to his descendants, speaking about his desire to secure for history the many stories that unfolded within the house’s walls. These stories are told from Burdette’s point of view, as well as with his diction. A veteran of the Mexican-American war and a high school graduate, his writing conveys the spoken English of the time. Though the narrator is invented, most of the people with whom he interacts are historical, making the book a blend of the artistic with the factual.

The diary is continued through seven generations, with each new narrator signaled by a change of font. For continuity, all succeeding generations also have the same middle initial (“Q” for Quentin). The most recent entries are done via Blackberry and email to give the interchanges a contemporary feel. Also passed along with the diary is a scarf, the gift of President Lincoln to Elliot Q. Burdette. The fate of this present at the book’s close is quite striking. The book is beautifully produced on handmade paper. There are copious sketches and illustrations. The book is bound within a handsome brown leather satchel.

In an interview David Bruce Smith spoke about the challenges of composing a work about Abraham Lincoln, one of the most written about people in world history. He rejected the idea of a straightforward narrative of Lincoln’s time at the cottage as too similar to the kinds of works that have already been composed about the man. The idea of using a diary form and adopting a soldier’s viewpoint is Smith’s innovative way of reapproaching the Lincoln story and making it fresh.

Mr. Smith also spoke fondly of some of his GW English professors, especially Christopher Sten. Mr. Smith took two upper division courses with Professor Sten at the precocious age of eighteen (he never told the teacher that he’d skipped the prerequisites), and truly enjoyed both.

More information about David Bruce Smith may be found at his website. The book may be purchased via Amazon.

Join the English Department Wednesday, October 20 at 6 p.m. for a poetry reading by three GW creative writing faculty members: Frederick Pollack, Lara Payne, and Daniel Saalfeld. The reading, which will be held in at 1776 G Street NW, Room 148, is part of our “Jenny 2” series, sponsored by the Jenny McKean Moore…

Attendees at this year’s Mezipatra (which means “mezzanine” in Czech).Can you find any of the GWU students? Once again this year, GWU students had the unique opportunity to join Prof. Robert McRuer in attending Mezipatra, the Czech Queer Film Festival The students in the class will be presenting their work at a one-day symposium Saturday,…

Speaking of Kavita Daiya, current undergraduates rejoice! After a long leave to research a book in India, Professor Daiya returns to teach this fall. Don’t miss this course: English 173Representing History: Nation and Romance in Contemporary Indian Literature and Cinema 11:10 am – 12:25 pm TR; Phillips Hall 510 This course explores the 20th and…