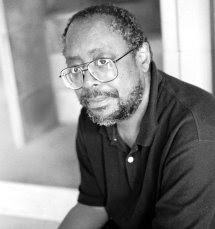 We know it’s early to be advertising this, but why not place the date on your calendar now?

Mr. Jones won the Pulitzer prize for his stunning novel The Known World. He has also held a MacArthur Fellowship. He will be introduced by President Stephen Knapp — who, besides running a major metropolitan university, is also a specialist in 18th- and 19th-century English literature and literary theory.

The event is free and open to anyone who like to attend. If you are an English major and DON’T attend, the department chair will seriously contemplate withholding your diploma come Commencement because, what are you, crazy? This is Edward P. Jones.

Read this. Then tell me the counter-example isn’t English majors. Who could be less lemming-like? They are practically flamingoes. Or platypi. Share on FacebookTweet

Our intrepid Front Office Student Worker, Sasha, somehow conned the department chair into opening a Twitter account under the name “GWENGL.” A series of tweets erupted yesterday, with more likely to follow. We consider this twitter twaddle to be a two week experiment. Most of what will be disseminated will be lies (we are a…

English is said to overlap with many other disciplines: American studies, theater, linguistics, and more. But how about psychology? Maybe this would not be your first connection, and even Marshall Alcorn is not the first to claim that the two subjects go together. Our Director of the English Undergraduate Studies, Director of Human Sciences, and…