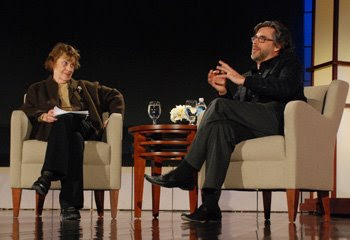 Chabon appeared as part of the English department’s Literature Live program, which introduces students to prominent Jewish-American authors. Chabon read two of his newest short stories and sat down for an informal interview with English professor Faye Moskowitz at Monday night’s event.

Chabon said he is comfortable with being labeled a Jewish-American writer, but said he wants to be known for more as well. He used the example of science fiction writers who are consigned to what he referred to as “the ghetto” of the bookstore “because of the atoms and the little rocket ships on the label.”

Chabon’s first reading, titled “First Father,” detailed being in Grant Park in Chicago with his youngest son, Abraham, on the night of President Obama’s election. The night evoked conflicting emotions in him as he described how hesitant he would be to bring his children into the limelight like Obama’s two young daughters.

The second reading, “First, First Father,” was about what he termed the “minutely savage” event of the Jewish ritual circumcision for his sons. In the reading, he thought it ironic that he would subject his son to what he said amounted to genital mutilation in the name of God, whom he described as sounding like “every asshole I’ve ever met.”

Chabon discussed the wide limits of the historical fiction genre.

“The most important thing is that it is not history. It can’t be held back by the facts. If I say it happened, it happened. You can become a prisoner in the facts if you allow this madness,” he said. “While it’s still important to make it believable – and that’s where research is important – there are fissures in the impenetrable surface where I can fill my imagination in.”

Edward P. Jones, the Wang Visiting Professor in Contemporary English Literature, introduced Chabon at the reading. Jones, also a Pulitzer Prize winner, offered a tribute to Chabon and recalled how he had underlined many passages of Chabon’s first novel, “Mysteries of Pittsburgh,” after first reading it.

Earlier in the day, Chabon participated in a question and answer session with Moskowitz’s class. Students said he was friendly and engaging and answered questions on topics as varied as his personal writing process to life as a parent.

Moskowitz is optimistic that the new literature program, made possible by a gift from David Bruce Smith, an alumnus and member of the Board of Trustees, will be continued in the fall. She added that she is elated to have prominent authors like Chabon come to the University.

Join the English Department Wednesday, October 20 at 6 p.m. for a poetry reading by three GW creative writing faculty members: Frederick Pollack, Lara Payne, and Daniel Saalfeld. The reading, which will be held in at 1776 G Street NW, Room 148, is part of our “Jenny 2” series, sponsored by the Jenny McKean Moore…

Erica Jong Tomorrow Jewish Literature Live hosts a special evening with award-winning Author, Erica Jong. The reading will be at 7 p.m. in SMPA B07. A New York native, Jong is best known for her work in fiction and poetry. Her first novel, Fear of Flying, has sold more than 20 million copies worldwide. Jong has…

So you’re wondering what to do before the English Department’s BIG READ on February 11 at 4 p.m. in Rome 771? (That event, as you recall, will give you an exclusive audience with the fabulously witty and talented Howard Jacobson, known to Brits as a novelist, newspaper columnist, broadcaster, and all-around public intellectual, and yet…

On Monday, March 3, Prof. Gayle Wald participated in Woolly Mammoth Theater’s panel discussion for its new play, “Stunning.” Prof. Wald was invited to contribute her scholarly insight into the play’s themes.Here is what Prof. Wald had to say about the event: The evening consisted of a reading of a scene from the play by…