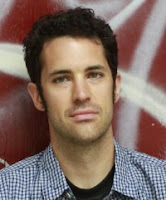 Mishka Shubaly is a musician, memoirist, and marathoner who has written about his experience with “drink, drugs, disasters, desire, deception, and their aftermath,” as well as recovering from addiction and his new life in sobriety.  The author of several Kindle Singles bestsellers, his work has drawn comparisons to Charles Bukowski, and his new memoir “not only describes Shubaly’s two decades at the mercy of the bottle, but also his ultimate redemption via extreme long-distance running…[including] 50-60 mile all-terrain races,“ something he compares in terms of level of masochism to the addiction and alcoholism he left behind.
Despite the serious nature of the topics he considers, his tone is full of snark and wit, and he speaks of his success with an endearing level of self-deprecation and humility. The bio from his website details his multiplicity of experiences:
“After receiving an expensive MFA in Fiction from Columbia University, Mishka Shubaly promptly realized he was more interested in playing music in dive bars than writing. He lived out of a Toyota minivan for a year, touring nonstop, and has shared the stage with artists like The Strokes, The Yeah Yeah Yeahs and The Decemberists among others […] His work has been praised for its grit, humor, fearlessness and heart.  [… he] lives in Brooklyn where he writes music and plays bass for Freshkills. He is at work on a new solo record of his original songs and a full-length memoir. He does not own a dog but he thinks about them often.” 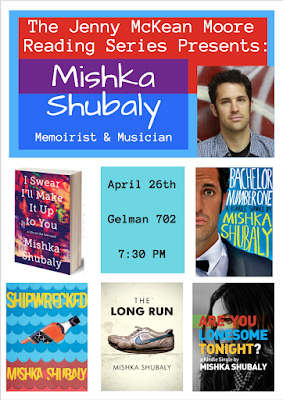 The FAQ section of his website includes some advice
for aspiring writers:

Q: How can I get my book published?
A: The first step is to write it. The second step is to make it totally amazing. And I don’t know what the third step is because, as you may have noticed, I haven’t published a for-real book yet…

Check out his music on Soundcloud! The Only One Drinking Tonight
“New York-based singer-songwriter Mishka Shubaly writes as he lives – hard, by the seat of his pants, and without recourse. He lives as if today is his last, and writes songs that reflect this dirt-underneath-the-nails lifestyle. Fans relate to his drunken, bloody mess of a life – and art truly does imitate life here. Nothing proves Mishka Shubaly’s dark, but somehow upbeat style of gruff, muddy, rockin’ indie-folk with a dark twist – “

Join students in Contemporary LGBT Writing on March 10 at 7 PM for a roundtable discussion with Jim Hubbard and Sarah Schulman, producers of the documentary film United in Anger: A History of ACT UP (2012).  United in Anger tells the story of the early days of AIDS activism, from the perspective of those most…

The 2017-2018 Jenny McKean Moore recipient, Sally Wen Mao, will be reading from her latest book, Mad Honey Symposium, on September 14th in Gelman Library (Room 702) at 7:30 pm. National Book Award Winner Terrance Hayes says of Mao’s debut: “The luminous image of a mouth ‘digesting light’ and later spitting ‘the light out because it…

The GWU English Department, British and Postcolonial Studies Cluster and the University Honors Program invite you to a lecture: Translated From the English:  British Reality on the Global Screen Professor Jim English, John Welsh Centennial Professor of English at the University of Pennsylvania Director of the Penn Humanities Forum Wednesday March 5, 2014 – 2:30…

Dear English Majors, The Department of English is looking to hire a student research assistant who will work 5-10 hours per week (60 hours total per semester) with Prof. Alexa Alice Joubin on her new book on Shakespeare on film which is supported by the GW Humanities Center. This is an entry level position, and all training…