Join the GWU English department on 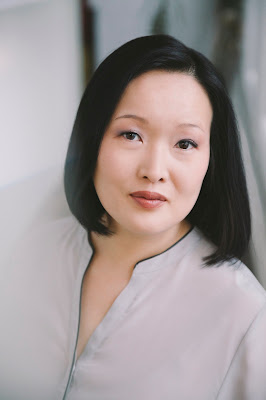 The newest and most welcome addition to our creative writing faculty, Jung Yun is the author of SHELTER, published by Picador in 2016 and long-listed for the Center for Fiction’s First Novel Prize, as well as being recently named an Opening Round Nominee for Best Fiction Book of 2016 by Goodreads.  Her work has appeared in Tin House (the “Emerging Voices” issue); The Best of Tin House: Stories, edited by Dorothy Allison; The Massachusetts Review; and The Atlantic Monthly. She is the recipient of two Artist Fellowships in fiction from the Massachusetts Cultural Council and an honorable mention for the Pushcart Prize. Currently, she is an Assistant Professor of English at the George Washington University.
SHELTER is a stunning work of fiction that traces the life of its protagonist Kyung Cho, who “is a young father burdened by a house he can’t afford. For years, he and his wife, Gillian, have lived beyond their means. Now their debts and bad decisions are catching up with them, and Kyung is anxious for his family’s future.
A few miles away, his parents, Jin and Mae, live in the town’s most exclusive neighborhood, surrounded by the material comforts that Kyung desires for his wife and son. Growing up, they gave him every possible advantage—private tutors, expensive hobbies—but they never showed him kindness. Kyung can hardly bear to see them now, much less ask for their help. Yet when an act of violence leaves Jin and Mae unable to live on their own, the dynamic suddenly changes, and he’s compelled to take them in. For the first time in years, the Chos find themselves living under the same roof. Tensions quickly mount as Kyung’s proximity to his parents forces old feelings of guilt and anger to the surface, along with a terrible and persistent question: how can he ever be a good husband, father, and son when he never knew affection as a child?
As Shelter veers swiftly toward its startling conclusion, Jung Yun leads us through dark and violent territory, where, unexpectedly, the Chos discover hope. Shelter is a masterfully crafted debut novel that asks what it means to provide for one’s family and, in answer, delivers a story as riveting as it is profound.” – Amazon 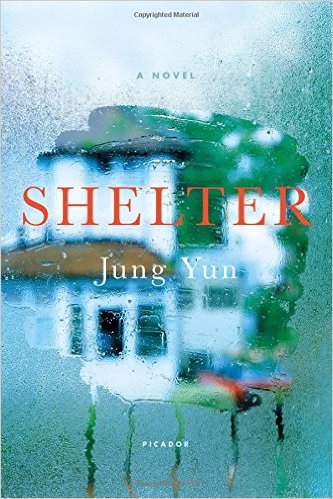 Praise for SHELTER:
“Gripping… Yun shows how, although shelter doesn’t guarantee safety and blood doesn’t guarantee love, there’s something inextricable about the relationship between a child and a parent… SHELTER is captivating.”
—   The New York Times Book Review
“Yun has written the rare novel that starts with a strong premise and gets better and richer with every page, each scene perfectly selected, building on the last… Like the writer’s version of a no-hitter, SHELTER is a marvel of skill and execution, tautly constructed and played without mercy.”
—   The Los Angeles Times Book Review
“This absorbing, suspenseful début tracks familial obligation and the legacy of trauma in a Korean family. The narrative piles on surprises at a tightly controlled clip…”
—  The New Yorker
“The novel grows darker and darker until all its internal contradictions are eclipsed by an ending as disturbing and bereft as anything you’ll read this year.”
— The Wall Street Journal
“Shelter is domestic drama at its best, a gripping narrative of secrets and revelations that seized me from beginning to end.”
—Viet Thanh Nguyen, Pulitzer Prize-Winning author of The Sympathizer.

Looking for some serious English Department nerd action this weekend? Look no further — The National Book Festival is upon us. Check out the incredible line up of authors that includes Henry Louis Gates, Justice Ruth Bader Ginsberg, Barbara Kingsolver, Sigrid Nunez, and many dozens more. Find your favorite author, discover news ones, and generally…

Eli Clare, portrait by Riva Lehrer The University Writing Program, English Department, and Disability Support Services welcome Eli Clare to GWU on Wednesday October 3rd, when Clare will speak on “Notes on Cure, Disability, and Natural Worlds” at 7 pm in Gelman 702 (The International Brotherhood of Teamsters Room). Through storytelling and critical analysis, Eli Clare explores the…

We are proud to announce a panel for career paths for humanities PhDs on Thursday evening! This event features GW alumni, and we hope you will join us for what promises to be a great conversation. Succeeding Outside of the Academy: A Conversation About Career Paths For PhDs in the Humanities with Dr. Emily Dufton,…

Join us on Monday for a screening of  The Line Has Shattered,  a documentary on the 1963 Vancouver Poetry Conference with the Director, Robert McTavish. Where: Gelman Library, Room 214 2130 H Street, Washington, DC 20052 When: 7 p.m. – 9 p.m. RSVP Required. Email cathye@gwu.edu “The Line Has Shattered is an invaluable teaching tool as well as a…

MG Lord  is a cultural critic  and writer.  Her books include Forever Barbie: The Unauthorized Biography of a Real Doll and Astroturf: The Private Life of Rocket Science, among other publications.  She also worked as a political cartoonist for Newsday.  She is Assistant Professor of the practice of English at University of Southern California.  Join us for her reading December…

Professor Gayle Wald will read from her new book Shout, Sister, Shout! The Untold Story of Rock-and-Roll Trailblazer Sister Rosetta Tharpe at local bookstore Politics and Prose today at 1 PM. Look for her as well at Busboys and Poets on Wednesday March 7 at 6:30. Share on FacebookTweet