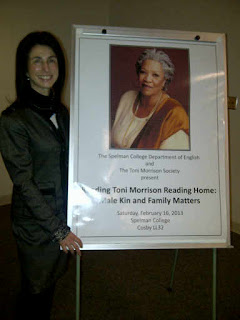 On Saturday, February 16, Professor Evelyn Schreiber was a guest speaker at Spelman College in Atlanta, GA, at a one-day Symposium, “Reading Morrison, Reading Home: Male Kin and Family Matters,”  sponsored by Spelman College and the Toni Morrison Society.  The morning panel, moderated by Prof. Michelle Hite, Spelman College, focused on Morrison’s most recent novel, Home and featured four scholars:  Prof. Schreiber, Prof. Herman Beavers from University of Pennsylvania, Prof. Justine Tally from University of La Laguna, Spain, and Prof. Meredith Gadsby from Oberlin College. In the afternoon, a panel moderated by Prof. Stephen Knadler, Spelman College, discussed images of masculinity in Morrison’s fiction and included four scholars:  Riche Richardson from Cornell University, Lawrence P. Jackson from Emory University, Stephane Dunn from Morehouse College, and Valerie Babb from University of Georgia.  Students and faculty from Spelman and Morehouse, as well as from other neighboring universities, took part in a rich discussion of Morrison’s novels (Home in particular), covering her concepts about home, her male characters, and other topics that surfaced.  Spelman became quite literally a “home away from home” for Prof. Schreiber and the other guest speakers as they were housed in the new “Green Dorm,” a lovely apartment-style dormitory that offers hospitality to visiting scholars via a group of suites on the third floor.   The fine soundproofing allowed Prof. Schreiber to get a good night’s sleep before her talk despite a well-attended Friday-night campus party! 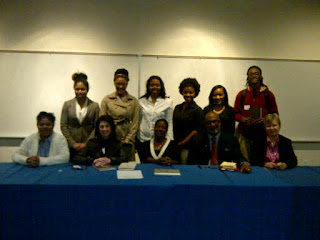 Professor Jeffrey Cohen‘s new book Earth is featured as a GW Hatchet summer reading suggestion. Read all about it here, and find the book here or here. Share on FacebookTweet

Here is some news from our British and Postcolonial Studies Cluster, where some faculty have been publishing new research and forging exciting institutional connections in the US, UK, India and Ireland. Jenny Green-Lewis is glad to say that her essay on Victorian photography and the novel, written for the new Oxford Handbook of the Victorian…

What do you think of when you hear the name, Michael Chabon? Comic books? Coming of age? Judaism? Pittsburgh? Movie adaptations? Chances are marijuana was probably not on that list. So when the lights dimmed in Lisner Auditorium this past Friday night and Chabon cracked the spine of his new collection of nonfiction essays, Manhood…

The Flying Notebook With its spiraling metal body and white pages for wings my notebook flies over my bed while I sleep— a bird full of quotations and tiny images who loves the night’s dark rooms, glad now to be free of my scrutiny and my pen point. Tomorrow, it will go with me into…

We at GW English hope that your Thanksgiving Break is a restful one surrounded by loved ones … and perhaps curled up with some of those books you’ve been wanting to read!  We’ll see you next week. Share on FacebookTweet

A reading from the award-winning book by Kenny Fries to be published by University of Wisconsin Press in September, 2017.  October 17, 6 PM in Gelman Library 702 Kenny Fries, author of In the Province of the Gods An American’s journey of profound self-discovery in Japan, an exquisite tale of cultural and physical difference, sexuality, love, loss, mortality,…