Alexa on Shakespeare Around the Globe, Part 2

Speaking on touring performances while grappling with demanding international travel itineraries and writing several talks over the Atlantic and Pacific definitely brought home the idea of arts perpetually in transit. The experience also gave me a new perspective on globalization. “Global village,” as it turns out, is a cheap slogan detached from reality. The sheer distance to be traversed and all the oceans to be crossed are a sobering reminder of the importance of rooted cosmopolitanism and of locality. 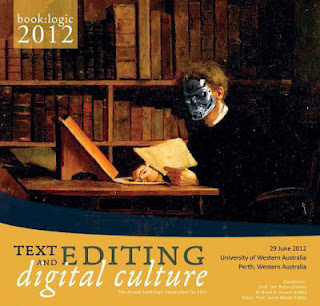 This digital humanist takes the lesson to heart. Reading and writing are always done from somewhere rather than nowhere. Archives that are born digital have the capacity to both eradicate and preserve a sense of place. Travel restores a sense of place to our visceral and virtual experiences. This is one of the points I made in my keynote at the 2012 Book:Logic conference on “Text Editing and Digital Culture” at University of Western Australia, Perth.

The point-to-point distance has implications not only for globetrotters but also for Web surfers. This impressive fiber-optic communications cable map shows the round trip latency, bandwidth limitations, and signal delay increasing with the distance: 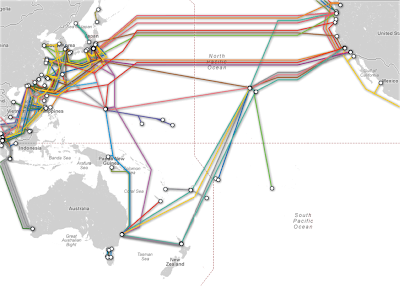 During my trip to Australia, I discovered that the Internet is simply slow “Down Under” for the reasons outlined above. For example, to show a streaming video clip during my talk in Perth, I have to send a signal to a server in Building 56 at MIT which hosts Global Shakespeare. The signal has to either cross vast deserts on the Australian continent before arriving in Sydney for one of the trans-Pacific cable links to the western seaboard of the United States, or follow the cables from Perth through Jakarta, the Indian Ocean, Cape Town, Lagos, the Atlantic Ocean, and Fortaleza (Brazil), to reach the eastern seaboard of the U.S.
In literary history as in life, there is no such thing as universalism. In fact, the “virtual” world without borders promised by Internet triumphalism has multiple limitations imposed by international Internet traffic flow and speed, and boundaries imposed by nation-states. International Internet access means something entirely different to users on the African continent. If you live behind the infamous “Great Firewall” in China, Facebook, YouTube, and even some academic email services are inaccessible unless you have acquired certain Web-based gymnastic moves. Even when censorship is not an issue, South Korea’s Daum tvPot and China’s Tudou.com and Youku.com are far more accessible and popular than what can sometimes be perceived as the universal video platform of choice, YouTube. UNESCO’s Broadband Commission for Digital Development predicts that by 2016 forty per cent of the world’s population, or 3 billion people, will be using the Internet, and English will no longer be the dominant language for Internet contents. If you have traveled outside your comfort zone—defined by your linguistic repertoire and cultural knowledge—these insights will come at no surprise.
In plain English: the world is (still) a big place!

Beginning October 27, join #GWBookLife for the second installment in the virtual book club series. Join us as we venture into a series of short stories by award-winning novelist and short-story writer Kali Fajardo-Anstine. Connect with other passionate readers within the GW community as you discover new stories and engage in witty conversation! Follow our social…

Our Open House this afternoon brought together a wide variety of English Department community members, everyone from first-year students to graduating seniors, as well as graduate students, alums, and of course faculty. Thanks to all who came! We closed the event with a tribute to Toni Morrison led by Professor Evelyn Schreiber. It was moving…

GW English will hold a celebration of the publication of A Cultural History of Disability in 2021.  This will most likely be an online event as our 2020 celebration was postponed due to the pandemic.  We will announce the details of this event in early 2021, but in the meantime: the six volumes are open access…

Below are some reflections on the GW English Department given by our former colleague Gail Kern Paster at Commencement in 2004. Professor Paster was the recipient of an honorary degree. Professor Paster joined the department in 1974, rising from the rank of instructor to full professor. An internationally acclaimed Shakespeare scholar, Paster left GW in…

Dear English Department students,  Welcome back, and a special welcome to first-year and newly declared English majors just joining us for the first time! It feels exciting (and a bit intimidating) to contemplate gathering again in our classrooms for the first time since the pandemic erupted. As we’ve prepared to re-open our suite on the…