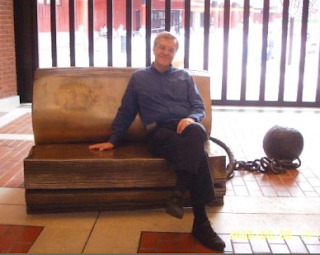 Recently, the department emailed out copies of its first electronic newsletter to more than 1,300 English department alumni, as well as current students. The newsletter is now posted for all to read on the homepage of the department’s website.

One of the benefits of sending out the newsletter is that I get to hear from a range of alumni–recent and not-so-recent, in DC, on the East Coast, or elsewhere. Here is one particularly fascinating story sent in by Don Larsson (BA 1971), an English professor at Minnesota State University. A newsletter article noting Prof. Robert Ganz‘s impending retirement prompted Prof. Larsson to recall a memorable class with our longest-serving Professor of English.

Here is Prof. Larsson in his own words:

Reading of Professor Ganz’s pending retirement reminded me of a great lesson in poetry. It was February 19, 1970, the day after five members of the Chicago 7 had been convicted of crossing state lines to “incite” violence during the 1968 Democratic Convention. Protesters had scheduled a “TDA” (The Day After) march on the Watergate complex, where Nixon’s Attorney General, John Mitchell, lived. The District’s Civil Disturbance Unit had been brought out to meet the marchers.

In the meantime, I was in Professor Ganz’s American Poetry class and we were studying William Carlos Williams. Outside, the late afternoon sky was overcast, but with that slight, misleading hint of spring to come with which the District could taunt you from time to time. (Outside the protestors were being driven back to campus by the CDU.) We read and discussed the importance of red wheelbarrows and the goodness of plums. (The CDU had started clubbing even non-protestors on the campus streets.) Ganz danced, clothed, like Williams dancing naked before his mirror chanting “I am lonely.” (The CDU was dragging students and others seeking refuge from the dorms.) A wisp of a cloud floated by the window facing the quadrangle.

Ganz paused. “I wonder if that’s tear gas?” he asked. He cracked the window open, then winced and quickly slammed the window shut.

The gas, just a bit of it, was dispersing through the room. Our eyes began to burn, the backs of our throats began to feel raspy. But somehow, Professor Ganz managed to continue with a reading of Williams’ amazing multivocal poem “The Sea-Elephant.” We heard the cynical showman’s voice, the woman insisting that “it’s wonderful but they/ ought to/ put it/ back into the sea where/ it came from,” and the voice of the sea-elephant himself, whose “Blouaguh!” was now denser, rougher than Williams might have imagined, nearly choking on the gas, until Ganz and Williams reassured us that “spring/ they say/ Spring is icummen in – – -“

“Not in ideas but in things,” Williams had said. Reality was not only in the streets that day.

Look to this blog for details about a spring “Last Lecture” event to celebrate (and once again, to learn from) Bob Ganz.

6 days remain until the Edward P. Jones reading at the Jack Morton Auditorium (Thursday January 29 @ 5 PM). In his GW debut as a scholar of literature, GW President Steven Knapp will introduce Mr. Jones. Share on FacebookTweet