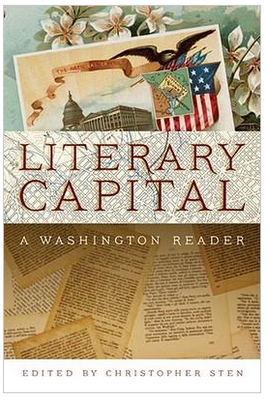 Literary Capital, Prof. Chris Sten‘s collection of “Washington writing” appears from University of Georgia Press later this week. Currently, the book is featured in a two-page spread in the press’s spring/summer 2011 catalog!

Hailed as “an indispensable guide to the literature, culture, and history of Washington, DC,” Literary Capital gathers historical writing focused on politics and writing about the lives and times of the people of DC with official Washington as the setting. The book also defines a core group of “Washington writers,” native and naturalized authors who focus much of their work on the city: Frederick Douglass, Henry Adams, Jean Toomer, John Dos Passos, Gore Vidal, Ward Just, and Susan Richards Shreve, among others.

Prof. John Stuaffer, Chair of the History of American Civilization and Chair of English at Harvard University, writes:

Here, finally, is a book that captures the nation’s capital in all its glory and tawdriness, revealing why it has long been a ‘magnet for writers,’ as Christopher Sten writes in his superb introduction. With its brilliant selection of writings, it is one of the very best books on the literature of a city.

Readers of this blog are cordially invited to toast Chris and hear him read from and talk about the book at Politics and Prose Bookstore at 6 p.m. on July 16. Autographed copies of the book will be for sale at the event.

Thomas Mallon with Daniel Day-Lewis On Saturday, October 7, Professor Thomas Mallon, Director of Creative Writing in the Department of English, was inducted into the American Academy of Arts and Sciences.  Professor Mallon is the author of eight novels, including Watergate: A Novel. last weekend. He is the third member of George Washington University’s Faculty, and…

On October 23 at 5 PM in the Marvin Center, we will hold our inaugural GW English Distinguished Lecture in Literary and Cultural Studies. Rosemarie Garland-Thomson will present. Complete information is here. I urge you to come. We are trying to build a better sense of intellectual community at GW, especially for those of us…

We scholars publish much that can be described charitably as dry. It’s a pleasure to post here some scholarship that is not only moist, it is also sweet and beautiful. Below you will find a recipe that Professor of English Ann Romines created from references in Eudora Welty’s Delta Wedding. Professor Romines also provides a…