Professor Evelyn Schreiber and Undergraduate Nicole Welsh attended the Fifth Biennial Conference of the Toni Morrison Society this past summer. The event, which was hosted from July 24th-27th, took place in Charleston, South Carolina, which is an important site of the American slave trade. At this conference, Nicole presented a paper entitled “Can the Center Hold: A Modernist Look a

t Milkman and Hagar in Toni Morrison’s Song of Solomon”. Nicole is the first undergraduate to ever present at this conference, an incredible accomplishment! Nicole was able to travel with the support of the Writing Center and the Dean’s Office. After she graduates, Nicole will be working with Teach For America, teaching secondary English in Prince George’s County. 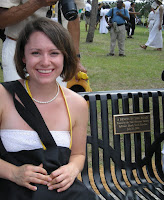 The Toni Morrison Society Conference also installed the first bench of the “Bench by the Road” project, which was established in response to Morrison’s comment regarding the absence of a suitable place to discuss slaves and their history. Morrison stated, “There is no suitable memorial, or plaque, or wreath or wall, or park or skyscraper lobby…There’s no 300-foot tower, there’s no small bench by the road.” In response to this comment, the Toni Morrison Society is establishing a series of benches at important sites of African American History. This first bench, to be maintained

by the US Park Service on Sullivan’s Island, commemorates the point of entry for 40% of all slaves entering the United States. Professor Morrison was quite moved by this ceremony, which she attended along with other events at the conference. Professor Schreiber and Nicole also attended to a particularly moving speech by Professor Joseph Opala of James Madison University, who discussed the importance of Bunce Island, an island off the coast of Sierra Leone that was the site of a large fortress that housed slaves before their transport to other parts of the world. Conference attendants were also able to hear Toni Morrison read from her newest novel, A Mercy.

The New York Times covered the event and Nicole’s paper is even mentioned in the article! This sounds like it was an amazing conference and congratulations to Professor Schreiber and Nicole on this great accomplishment!

We’re not quite there yet. But it is Spring Break. Here’s what students and professors are doing over the break: Prof. Tara Wallace will be flying to Vancouver to present a paper at the annual conference of the American Society for Eighteenth-Century Studies. Prof. Christopher Sten will be traveling to Minnesota to see family, and…

Here’s a suggestion. Here’s another. And another. And then you can have these books signed by MICHAEL CHABON himself on Monday, March 23 at 7 PM in the Jack Morton Auditorium. Chabon will be introduced by Edward P. Jones, will read from his work, and will be interviewed live by Faye Moskowitz. Book signing follows….