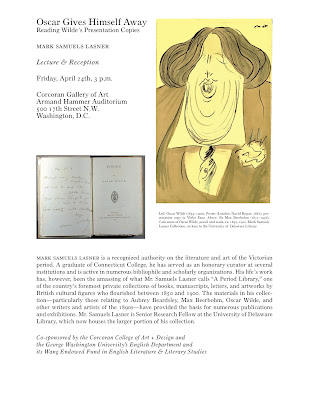 Oscar Gives Himself Away:
Reading Wilde’s Presentation Copies
Mark Samuels Lasner
Lecture & Reception
Friday, April 24th, 3 p,m.
Corcoran Gallery of Art
Armand Hammer Auditorium
500 17th Street N.W.
Washington, D.C.
Mark Samuels Lasner is a recognized authority on the literature and art of the Victorian period. A graduate of Connecticut College, he has served as an honorary curator at several institutions and is active in numerous bibliophile and scholarly organizations. His life’s work has, however, been the amassing of what Mr. Samuels Lasner calls “A Period Library,” one of the country’s foremost private collections of books, manuscripts, letters, and artworks by British cultural figures who flourished between 1850 and 1900. The materials in his collection—particularly those relating to Aubrey Beardsley, Max Beerbohm, Oscar Wilde, and other writers and artists of the 1890s—have provided the basis for numerous publications and exhibitions. Mr. Samuels Lasner is Senior Research Fellow at the University of Delaware Library, which now houses the larger portion of his collection.

Former GW-British Council Writer in Residence Suhayl Saadi has a new book, Joseph’s Box. Check out the website and add the book to your summer list. Share on FacebookTweet

Save the date! On Friday October 23 at 5 PM, Rosemarie Garland-Thomson will deliver the inaugural GW English Distinguished Lecture in Literary and Cultural Studies. Professor Garland-Thomson is a founder of Disability Studies, an interdisciplinary approach to literature and culture that examines (among many other things) how the normal is created, and who is excluded…

Congratulations to Jenny McKean Moore Writer-in-Washington Tilar Mazzeo for a full-page review of her recent book, The Secret of Chanel No. 5: The Intimate History of the World’s Most Famous Perfume, in Sunday’s New York Times Book Review. (If you go to the Times site, you can also be directed to a Google Books excerpt…

Media Credit: Anne Wernikoff Professor Julia McCrossin looks into how authors use fat characters in literature and film. Fat studies has gained national attention but is still considered an “emerging” field of identity issues, she said. by Caitie DawHatchet Reporter A GW professor is making waves in an emerging field you may not know existed…