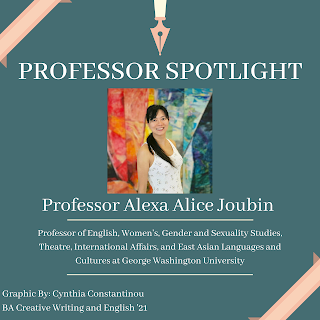 Dr. Alexa Alice Joubin, professor of English and Women’s, Gender and Sexuality Studies at George Washington University, and founding co-director of the Digital Humanities Institute, has recently completed her latest work; Shakespeare & East Asia. This book is part of Oxford University Press’s Oxford Shakespeare Topics Series, and in it you’ll learn about Korean transgender cinema, East Asian feminism, how actors reposition their racialized bodies in the story, and how Akira Kurosawa’s films influenced Steven Spielberg’s and George Lucas’s works, including the Star Wars. The fascinating case studies show deep connections between Asian and Western performance traditions. Bringing film and theatre studies together, this book sheds new light on the two major genres in a comparative context and reveals deep connections among Asian and Anglophone performances. Join Professor Joubin for her book launch on February 19th. There will be a free book giveaway for one lucky participant in the Q&A portion of the event.

Register for the book launch at: https://www.eventbrite.com/e/shakespeare-and-east-asia-tickets-136547261535 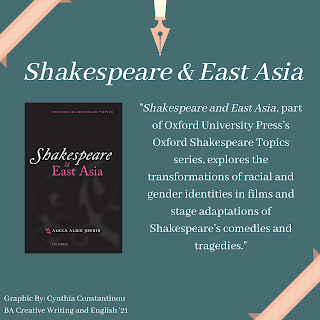 JMM Writer-in-Washington Kseniya Melnik Photo Credit: Morgan Demeter The Jenny McKean Moore Fund was established in honor of the late Jenny Moore, who was a playwrighting student at GW and who left in trust a fund that has, for almost forty years, encouraged the teaching and study of Creative Writing in the English Department, allowing us to…

Alexa will be spending the 2014-15 academic year in London.   Alexa Alice Joubin has been named the Fulbright Distinguished Chair in Global Shakespeare at Queen Mary University of London and University of Warwick for 2014-2015 and received the American Council of Learned Society’s Frederick Burkhardt Residential Fellowship at the Folger Library for 2015-2016. She…

Courtney Wang (BA, ’07), second from left Lieutenant Junior Grade Courtney Wang, US Navy, has been deployed to conduct counter piracy operations in the Gulf of Aden and in the Somali Basin; her work as a Surface Warfare Officer has taught her how to drive and fight warships and has taken her all over the…