From September 28-October 4, GW’s English Department is pleased to host Professor J. Jack Halberstam as this year’s Wang Distinguised Professor-in-Residence.  Halberstam is Professor of American Studies and Ethnicity, Gender Studies, and Comparative Literature at the University of Southern California.  He is the author of five books, including In a Queer Time and Place (2005), The Queer Art of Failure (2010), and Gaga Feminism: Sex, Gender, and the End of Normal, which is due out this month.   Gaga Feminism  examines the public persona of pop icon Lady Gaga and, through analyses of Gaga’s gender-bending performances, reflects on the myriad ways that sex and gender have rapidly evolved over the past few decades.  “Using Lady Gaga as a symbol for a new era,” publisher Beacon Press explains, “Halberstam deftly unpacks what the pop superstar symbolizes, to whom and why.  The result is a provocative manifesto of creative mayhem, a roadmap to sex and gender for the twenty-first century, that holds Lady Gaga as an exemplar of a new kind of feminism that privileges gender and sexual fluidity.”

The first event connected to Halberstam’s GW visit (full schedule below) will be a book launch for Gaga Feminism. 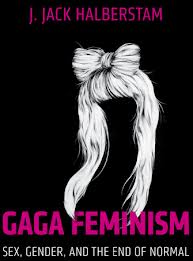 This visiting residency was created through a gift by Albert Wang and his family that has, since 2009, supported professors such as Edward P. Jones (now a member of the GW English Department) and José Esteban Muñoz.  The gift from the Wang family is one of the largest philanthropic commitments to GW’s Columbian College of Arts and Sciences’ Department of English.

Free and open to the public.  Books will be available for purchase.


Seminar for Students and Faculty with Professor Halberstam

This seminar is filled to capacity and now closed.  To be placed on a waiting list, please contact Robert McRuer at rmcruer@gwu.edu


GW Distinguished Lecture in Literary and Cultural Studies.  “Going Gaga: Spectacle and the Politics of Protest”

Free and open to the public.  Made possible by the Wang fund.

The faculty of the English Department voted unanimously yesterday to adopt the following as our mission statement: The English Department of the George Washington University is a research-active community of scholars and creative writers. We prize excellence in teaching, publication, and service. We engage with a diversity of texts within a global and transnational context….

We get excited about many things in the GW English Department. Our objects of affection range from guest lecturers to free copies of books being doled out. So naturally our enthusiasm has only doubled with the addition of the British novelist Howard Jacobson to our staff next semester as a visiting professor. Not only do…

Former GW-British Council Writer in Residence Suhayl Saadi has a new book, Joseph’s Box. Check out the website and add the book to your summer list. Share on FacebookTweet