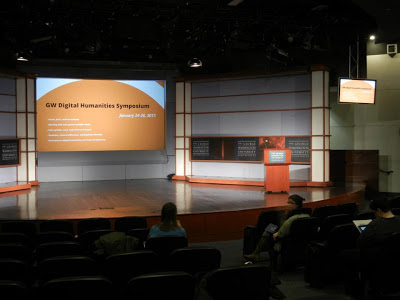 On January 24-26, GW was the proud host of the university’s first Digital Humanities Symposium

After all the excitement, some of the symposium participants spoke about the purpose of the symposium, how they became involved, and what digital technology could mean for the future of multiple fields (such as our own beloved English department).


How did you become involved with the symposium?
Alexa Alice Joubin:

(GW English professor and co-organizer of the Digital Humanities Symposium)

When I was hired by GW, I wanted to leverage GW’s unique position in Washington, D.C. to amplify the intellectual energy and vibe around here to turn GW into a center for digital scholarship. This symposium is part of my effort on these fronts.

The digital humanities is an exciting new field that uses digital tools (such as annotations, video interaction, and data mining) to study and teach traditional humanities subjects. The field also uses humanities theories to study digital artifacts and culture. There has been tremendous support from GW Provost Steven Lerman. Before coming to GW, Provost Lerman oversaw MIT’s Center for Educational Computing Initiatives, among many other important projects that advanced the cause of digital research and education.
Initiated by Medieval and Early Modern Studies Institute (MEMSI) and Dean’s Scholars of Shakespeare, the inaugural GW Digital Humanities Symposium, January 24-26, 2013, received widespread and enthusiastic support across many units at GW that ranged from School of Engineering and Applied Science to Columbian College of Arts and Sciences. GW’s new Vice Provost for Online Education and Academic Innovation Paul Schiff Berman gave opening remarks at the event.

What has been your experience with digital technology and the humanities?

My experience with digital technology as it relates to the humanities is that for the past two decades it has been both cutting-edge and controversial.  That is to say that there is a constantly growing number of great researchers who are striving to theorize the epistemic shifts the digital revolution has occasioned, who are trying to integrate digital platforms into their research and thinking, and who are using digital tools to tackle new research opportunities that digital humanities itself makes possible, especially those pertaining to globalization and network theory.  At the same time, digital humanities is controversial insofar as it presupposes a certain facility with digital tools and demands that researchers (in some cases) totally rethink what humanistic studies are and do.

I first became exposed to digital humanities when I was in college in the late 1990s and early 2000s, a period when there was an especially prescient push to serve new media alongside the traditional, text-based diet that made up a humanistic education. At this time, there were already several robust and relatively well-established databases aggregating journal articles and digitizing primary texts; the blogosphere and social media were just taking shape; and new computing horizons in terms of speed, processing, memory, and hardware were being etched into the sky everyday.
As a comparison, my large public high school used a card catalogue to index its library and had very few computers that students could access.  And even while I was in college during this tremendous boom, I had professors who did not or could not use email–which would be an incredible rarity today.  The digital world looked very different then, not just visually, but in terms of interactivity.  (If you have never done it, take some time to look at the Internet Archive’s Way Back Machine.)
Its looking different is just one tiny window into the way the questions that were asked about the new digital frontier (and the utopias spun around it) were also quite different.  A glance at our symposium’s schedule will show just how far digital humanities has come in its ability to pose and answer new questions–everything from linguistic data processing to sophisticated philosophical interrogation of the relationship between the body and machine.  If there is anything to say about my experience with digital humanities, though, it is that it is a field that has generated and continues to generate questions and methods that have yet to be considered, and many more that will be made possible by the work being done today, especially interdisciplinary work, which is also well represented at the GW’s inaugural DH Symposium.
The symposium was initiated by Medieval Studies and the GW Dean’s Scholars in Shakespeare, which is an interesting field to interact with technology. How did that come about? How do they interact?
Jonathan Hsy:
(GW English professor and co-organizer of the Digital Humanities Symposium)
If you were to ask most people to name fields that incorporate use of digital technologies, most people would probably not think of fields like medieval studies or Shakespeare scholarship. Many of the people associated with the GW Medieval and Early Modern Studies Institute work with digital technologies in different ways. Some libraries and other institutions — such as the British Library and Walters Art Museum — have digitalized many of their manuscript collections, which means that rare books and other materials are more widely available for researchers and students. I often use digital images of medieval manuscripts (including illustrations of literary texts or other materials) in my teaching as well as my own scholarship. Will Noel, one of our invited speakers, is a librarian who has been very active on Twitter and other social media encouraging institutions to make online images of medieval manuscripts freely accessible to the public via Creative Commons licensing.
Alexa Alice Joubin’s “Global Shakespeares” project offers an online archive of performance videos from all over the world and other resources for anyone interested in Shakespeare reception or broader issues of cultural exchange. In short, there are many ways GW faculty and others working in medieval and Renaissance studies engage with digital technologies. For some, it’s expanding the availability of materials that are otherwise obscure, rare, or hard to access; for others, it’s about creating an archive of materials that allows us to engage with artistic works of the past (such as literary texts and plays) in new ways.
One of the major aims of the Digital Humanities Symposium was to show that engaging with digital technologies is not just something that people do in science and engineering departments — people working in the humanities (including visual arts, literature, theater, linguistics, and cultural studies) all use digital technologies too, and humanists are often keenly interested in thinking more carefully about how we use media and how media transforms knowledge and produces new forms of art.
Together with Medieval and Early Modern Studies Institute, GW Dean’s Scholars in Shakespeare initiated the idea for the Symposium because it shares the goals of the conference. The Dean’s Scholars in Shakespeare is a signature program in GW’s Columbian College of Arts and Sciences that offers a select group of students a unique opportunity to explore the works of William Shakespeare in a global and multimedia context.

Ever since my time on my high school newspaper, improper grammar has really irked me. For example, I’m a huge fan of the Oxford Comma. Also, I used to watch Keeping Up with the Kardashians and cringe anytime the characters said, “my sister and I” when the correct phrasing would have been, “my sister and…