In Blacksburg, Virginia, on October 16th, 2012, James Madison University presented the Furious Flower Lifetime Achievement Award to two of America’s most recognized authors, Toni Morrison and Maya Angelou.   This presentation was followed by “Sheer Good Fortune,” a standing-room only tribute to Toni Morrison co-sponsored by the Center for the Arts at Virginia Tech and the Furious Flower Poetry Center at James Madison University.   The tribute to Ms. Morrison was hosted by Drs. Maya Angelou, Joanne Gabbin, and Nikki Giovanni.
Professor Schreiber organized the tribute from the Toni Morrison Society and with twenty-three TMS members presented a choral reading of the Baby Suggs sermon in the clearing from Beloved (pages 88-89 Hardcopy). Society members wore black and donned yellow choral stoles with the TMS logo on both sides to create a special atmosphere for Morrison’s words. 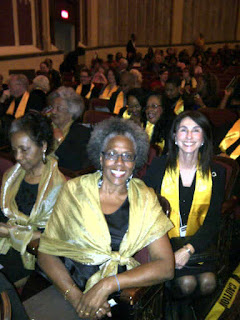 Maya Angelou’s opening words set the tone for a memorable evening.  In all, over 30 participants (including Maya Angelou, Nikki Giovanni, Angela Davis, Rita Dove, Edwidge Dandicat, Sonia Sanchez, Amiri Baraka, and India Arie), contributed celebratory readings from Ms. Morrison’s works.  Each selection was poignant and moving, leaving the audience overwhelmed by the beauty of Morrison’s words.   At the program’s end, Ms. Morrison responded with heartfelt pleasure.  She said that there are few times when she has been speechless and that this might be one.   “To have so many people answer the call to come together for one person and that one person is me, This is as good as it gets.”  She especially thanked Maya Angelou and mentioned that when she read “I Know Why the Caged Bird Sings,” she realized that a door was open for black writers and black women writers stepped through.  Black male writers were interested in “confrontation of the oppressed,” but black women were not as interested in this.  In fact, “when you get the white male out of the novel, real things open up.”   Morrison said that as an author, her work no longer belongs to her once it is published and comes back to her in “different voices.”   She enjoyed hearing the passages from her works expressed in so many different voices and especially thanked Angela Davis for reading from Desdemona, her a collaborative play with Peter Sellars, which “if I have to say it myself, is extraordinary!”  What an extraordinary experience for Prof. Schreiber who had the “Sheer Good Fortune” to take part in the Toni Morrison Tribute in Blacksburg, VA!
You can watch Maya Angelou and Toni Morrison at the event, here on YouTube.

Below is the reprinted version of an article, originally appearing on the CCAS’ Featured Stories page on April 5th, 2018, written by the English Department’s own, Professor Daiya. Read below to learn about the amazing success she had when she re-imagined one of her courses that inserted her student’s voices into public conversations about issues they are passionate…

The Modern Language Association, or MLA, has been in the news lately for venturing into the Twitterverse with recommendations on how to cite a Tweet. The association representing English professors, the MLA released its recommendations on the Web and on Twitter, where it engendered a lively discussion. Now the issue of Twitter citation style has…

Name Like an Empty Bag My house is a mess. Fuck. Fuck. I burned my  sweater on the stove. The smell of melted  acetate, of reading. What if I hate  it just because she does a better job  of being me than I do? Too familiar, the sound of keeping my mouth closed. I am…

Pretty women wonder where my secret lies. I’m not cute or built to suit a fashion model’s size    But when I start to tell them, They think I’m telling lies. I say, It’s in the reach of my arms, The span of my hips,    The stride of my step,    The curl of my lips.    I’m…

I rang in the new year in rural West Virginia, far from cell phone towers or, for that matter, a satellite connection to transmit images of the ball dropping in Times Square. Although I felt a bit disconnected from my annual TV ritual, the night sky was dark enough for star-watching, a rarity in Washington…