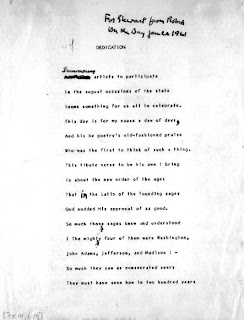 On Sunday February 18 2007, The Washington Post published a review of The Notebooks of Robert Frost by our own Robert Ganz. Professor Ganz is one of the few faculty members here who has earned the right to the description “beloved departmental institution.”

Excerpted below are a few (typically eloquent) paragraphs from the review.

But Frost wasn’t much afraid of clarity. He deplored the willful obscurity of some of his contemporary poets. These notebooks show that what gave his thought its life was his passionate belief in the importance of the individual person’s freedom of action. A couplet from one of his poems, “Let me be the one /To do what is done,” might have served as his motto. An entry in the notebooks asks “how far can we carry the idea of human responsibility?” The point was to carry it just as far as possible …

Frost felt that this beleaguered condition of having to hang upon unguaranteed outcomes is particularly reflected in the language of poetry. “Everything written is as good as it is dramatic,” in the sense that good words also hang upon outcomes. They aren’t merely saying, naming or describing things: “it has been my great object in poetry to avoid” the tone of “plain statement;” and while “it is the common way to think of the sentence as saying something . . . , it must do something as well.”

Good words, then, are serving the speaker’s and writer’s practical intentions or “designs” upon things and other persons. They are projected outward. Even the seeming monologues in Frost’s poetry are really shaped to constitute “my part in a conversation in which the other part is more or less implied” …

There is a great difference between what we only think is the case in life and the way it is in practice. Things that are neatly separate and distinct in thought are jumbled messily together in practice: “life is a . . . mixture in which matter and spirit are made one by the paddle of action.”

Amid the great jostling and shaking together of things in the field of action it is a wonder that anything is accomplished. Real prowess is required, every day, along with its attendant traits of character, which include belief, hope, love, vision and preference. The modernist inveighers against the so-called “intentional fallacy” made a great mistake in assuming that the conscious intellect is the main source of our intentions . . . our acts.

If you want to keep up via Facebook with all things related to the Edward P. Jones residency, join this group. And in case you’ve only recently emerged from a cave on a deserted island and/or have just been released after long abduction by alien beings of uncertain but unwholesome intent, the English Department at…

Below is a copy of a document I’ve just sent along to our dean and Advancement Office. Each department chair has been asked to come up with a Wish List. This dream of financial salvation will apparently be kept in mind should an eager donor or a genie who grants wishes suddenly materialize. I thought…

After having penned a cover review of Cynthia Ozick’s recent novel Foreign Bodies for the New York Times Book Review a little over a week ago, Prof. Thomas Mallon is featured in the latest New Yorker article, reviewing Jim Carroll’s posthumous offering, The Petting Zoo. Carroll, famous for his memoir The Basketball Diaries, was a…

Lori Brister, who is completing her PhD in GW’s English Department under the direction of Professor Jennifer Green-Lewis, was chosen to deliver the graduate student opening remarks at this year’s official Graduate Student Welcome Ceremony.  Lori was introduced by Provost Lerman, and then gave a speech to about 500 new graduate students in the Dorothy…