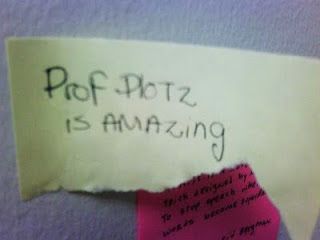 This photo was photoshopped for this blog, but only because I took it with my cell phone last year. (It’s still a bit blurry, as you can see.) Remember the wall of Post-It Notes we had on the 7th floor of Rome Hall last year? Well, this is an authentic note that an anonymous student posted. “Prof. Plotz is Amazing.” Need we say more?

As some of the readers of this blog will already know, Prof. Judith Plotz, a recipient of this year’s George Washington Award and a beloved member of this department since 1965, will be retiring this spring. It’s with decidedly mixed feelings that we approach this news of Prof. Plotz’s retirement: happy for Judith that she is making room for long-deferred plans–for writing, travel, study (a book on Rudyard Kipling), and grandchildren; sad that we will no longer have Judith as a colleague, friend, and mentor.

Judith Plotz has been a pioneering scholar and teacher in English, beginning her career at a time when few women were considered equal to men as professors. She quickly acquired a name for herself as a 19th-century specialist, and was one of the first women ever to be tenured in English. She has been a pioneering scholar of children’s literature, both nationally and at GW, and is author of Romanticism and the Vocation of Childhood, among other works. Prof. Plotz was also instrumental in introducing courses in postcolonial literature, especially literature of the British Empire and the Indian subcontinent, and Jewish American literature. She won the CCAS Dean’s Teaching Excellence Award in 1990, was department chair from 1991 to 1994, and won the Trachtenberg Award for University Service in 2000.

These quantifiable achievements only begin to speak to Judith’s contributions to English, the College, and GW, however. To thank Prof. Plotz for her dedicated service to generations of GW students, faculty, and staff, the English Department will be hosting a one-day Conference on 19th-Century Studies: In Celebration of Professor Judith Plotz on Friday, October 22, 2010. The conference has six confirmed speaks, all eminent scholars of Victorian literature, children’s literature, Romanticism, and/or postcolonial literature and theory: Carolyn Betensky (University of Rhode Island), John Plotz (Brandeis University); Rajeswari Sunder Rajan (New York University), Margaret Higonnet (University of Connecticut), Ulrich Knoepflmacher (Princeton University), and Richard Flynn (George Southern University). Look to this blog for more information as that conference approaches.

Her retirement does not mean that Judith will be severing her connections to GW English. She will be Emerita Professor of English, and in that capacity will continue working with Ph.D. students who have begun their dissertations under her mentorship, and will teach occasional undergraduate courses (look for her next spring).

The English Department hopes very much to initiate a search for Prof. Plotz’s successor in the fall. We’re still waiting on College and University approval for that search to go ahead, but we’re cautiously optimistic. No one can replace Judith Plotz, of course, but we can honor her legacy by ensuring that our students and faculty continue to benefit from the contributions of a 19th-century scholar of like intellectual acumen, energy, and compassion.

Here is the tentative schedule for the spring meetings of the GW Medieval and Early Modern Seminar (or GW MEMS, as we like to call it). The seminar is open to anyone who is interested in attending. Anyone not on our email list who would like to be may contact the seminar’s rapporteur, Lowell Duckert…

While not Valentine’s themed, Robert Hass’s “Privilege of Being” is the first poem that jumps to mind when I think of great romantic poetry. For the in-love and love cynics alike, enjoy and Happy Valentine’s Day. Privilege of BeingRobert Hass Many are making love. Up above, the angelsin the unshaken ether and crystal of human…

The English Department is happy to announce that English Major Samantha Yakas has joined us as the new Communications Liaison for the 2012-2013 school year.  The Communications Liaison helps us with all of our social media, including this blog (watch for Samantha’s posts), our Facebook page, and Twitter. Like us on Facebook: http://www.facebook.com/pages/English-Dept-GWU/31472949461Follow us on Twitter…

I’ve just returned from 6th and I, one of the most beautiful synagogues I’ve entered … and a lively space for the arts in DC. The English Department hopes to work more closely with them in the future. Here is an event for your calendar. GWU students can come for free. RSVP to jleventhal@sixthandi.org and/or…