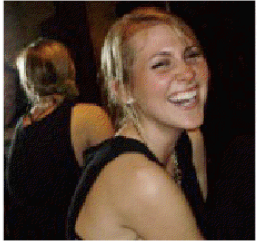 The English Department is thrilled to announce that Sarah Kuczynski, GWU class of 2012, will be blogging for us beginning in fall 2010. Sarah is an English/CW major from New Orleans.

Last week, Sarah read a poem about her hometown at an open mike event at Busboys and Poets, one of our favorite hangouts, and was asked to read her poem again at an event this Sunday there celebrating the debut of Treme, a new HBO show from the creators of The Wire.

The event is being hosted by Rebuilding Together, a national nonprofit that rehabilitates homes, especially for elderly people and people with disabilities. The event is at 8 p.m. and features a screening of Treme. Location is Busboys and Poets, 5th and K Streets, NW.

And (drumroll, please)… here are Sarah’s musings about how and why she switched to an English major from International Affairs. Welcome Sarah!

It took a few months for me to come out with it to my parents; they had the faces of two people who might in minutes witness their dearest daughter lift up her shirt to expose a “Thug Life” tattoo inked across her ribs. I let it out: “I switched to English.”

After I swtiched majors, I enrolled in English courses for the first time without feeling a guilty satisfaction reminiscent of the qualms that hit me in high school as I snuck out to reconnoiter Pyramus and Thisbe style. I began to rationalize.

So, here’s the barebones edition of what I use to justify my betrayal of International Affairs for a life in English and Creative Writing…

*Because I was once fed the synopsis to “The Little Mermaid” (Disney version) in one of my mother’s far from clandestine moments…I had only read the original fairy tale.

*Because much of my early childhood was spent speaking extemporaneously to the tattered bindings of books, the barrier between my thoughts and my parents.

* Because for years following the publishing of my mother’s guide to the short stories of Henry James, my brother and I could not find a sheet of paper that did not bear on its back some portion of this manuscript.

*Because it was a privilege in my family to tap away at the prehistoric typewriter, no matter the broken “back space,” and the consequent, constant need for correction fluid.

*Because my family ignored the advent of the Internet, making each puzzling word into a struggle with the ominous O.E.D that loomed on the corner bookshelf.

* Because never once in an International Affairs lecture was I provoked to pummel a girl in the head with a Norton Anthology of American Literature, as I had once done in high school English.

*Because when my mother sent me away to college, she slipped pages and pages of grainy paper on which she scrawled poems, not the standard toaster oven or towel set.

*Because, though my childhood was far from Dickensian, I flinch as I use a needless
abbreviation, and get a nervous twitch as I mercilessly edit a routine email.

***Finally, because this list is hardly inclusive, I crossed over. Let creativity reign.

Edward P. Jones Inaugural Reading TONIGHT at 5 PMThe Jack Morton AuditoriumSchool of Media and Public Affairs, First FloorFree and open to all, though seating is limited The Pulitzer Prize winning author of The Known World, Mr. Jones is the Wang Visiting Professor of Contemporary English at GW for Spring 2009 Share on FacebookTweet

Our sincere apologies for the fact that our tea and sherry swilling party was cut short by the evacuation of the Academic Center due to a suspicious package. Alumni will be heartened to know that six brave faculty members endured the long wait for re-entry to Rome Hall, then imbibed the remaining sherry … and…

This spring the English department is happy to have ENGL 3810:12 Jewish Literature Live once again! The class is an innovative, hands-on experience where students read and then meet authors and ask them questions about their work. In the past, the class has hosted Erica Jong, author of the break-through novel Fear of Flying, as well as Nicole…

Here’s wishing a good new year to all readers of the English Department’s blog. Share on FacebookTweet