Friends of GW English know that our community is collegial; what you might not have known is that we also have lots of drama in Rome Hall.
ACT I. Collaboration is a wonderful thing
The Shakespearean International Yearbook Volume 11: Special issue: Placing Michael Neill. Issues of Place in Shakespeare and Early Modern Culture is now out. The special issue is edited by GW English professors Jonathan Gil Harris and Alexa Alice Joubin, and Tom Bishop (University of Auckland, New Zealand), and Graham Bradshaw (who has retired).
ACT II. Students Debate The Tempest

Resolved that Prospero genuinely pardons his foes and is a model of true forgiveness and reconciliation.

We eagerly await news of the outcome. 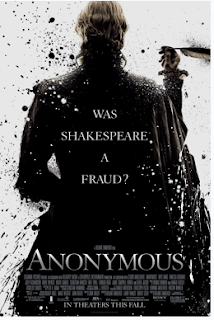 Graduate students in English and students in Prof. Joubin’s and Prof. Dugan’s Shakespeare classes were treated to a pre-release screening of Roland Emmerich’s controversial new film Anonymous on Oct. 25 at the Regal Theatre Gallery Place in downtown DC. “Set in the political snake-pit of Elizabethan England,” the film–with Shakespearean actor Derek Jacobi in the prologue–proposes that the Earl of Oxford Edward de Vere was the author of Shakespeare’s plays. Along the way, the film dramatizes “cloak-and-dagger political intrigue, illicit romances in the Royal Court, and the schemes of greedy nobles hungry for the power of the throne were exposed in the most unlikely of places: the London stage.”
As a follow-up, on Nov. 3, students enjoyed a roundtable to discuss the propaganda machine set in action by the film. In attendance were graduate and undergraduate students in English, and Profs. Hsy, Joubin, and Dugan. Among the topics discussed were the social expectations and resistance of “geniuses,” Hollywood’s penchant for “conspiracy” and scandals, and–most importantly–how to set historical facts straight.
Anonymous calls to mind such films as Miloš Forman and Peter Shaffer’s Amadeus. But there is one thing even undergraduates and non-specialist audiences do not buy. The film presented a very unconvincing picture of literary production. In the whole of early modern England, no one other than the Earl could write good poetry,  and “Shakespeare,” Jonson,  and Marlowe stumbled over one another to beg (or threaten as the case may be) de Vere for an uninterrupted supply of manuscripts (which acts peculiarly as drugs). The film also misled the audience to assume that no other companies or performance venues mattered in Shakespeare’s time.

The good thing that can come from “Anonymous” is that it can lead people to the real tour-de-force that is James Shapiro’s fine book Contested Will, Records of Early English Drama,  Early Modern London Theatres online,  and other vetted sources for further study. 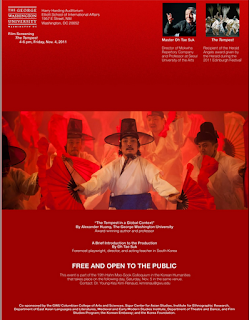 Renowned Korean director and playwright OH Tae-suk visited GW on Nov. 4 to talk about his film version of The Tempest.  Oh’s Tempest won the prestigious Herald Angel Award at the Edinburgh International Festival this year (August 2011).

Prof. Harris’s book collects his Sedgewick Memorial Lecture from 2011. Prof. Gil Harris has been on sabbatical this year, writing and doing research in India. But that doesn’t mean he has taken a hiatus in publishing. His newly released “Marvellous Repossessions: The Tempest, Globalization, and the Waking Dream of Paradise” is based on the Sedgewick…

Paula Mejia (BA, Creative Writing/English ’13, MA, English ’14) “I WROTE A BOOK – WHO  KNOWS WHAT AMAZING THINGS YOU CAN DO, TOO” Paula Mejia started as an International Affairs major at GW, and then encountered our Creative Writing faculty — which changed everything.  Margaret Soltan talks to her about it. Since you graduated from…

As President of the Residence Hall Association, Mike Massaroli is not only a junior studying Political Science, but he is a legitimate GW Celebrity.  AND, he cares about poetry.  Kenny Hoffman recently interviewed Mike about his favorite poem, Ernest Lawrence Thayer’s “Casey at the Bat,” and how poems figure into the life of the RHA.   THE…

Steve Hilmy is a rare breed of professor—insanely knowledgeable and the type that you’d want to go get a beer with because he’s so cool. If you speak to him for one second you realize this guy has more knowledge than you could potentially absorb in a lifetime. Born in Aberdeen, Scotland, Steve was then…

It’s that lazy time of the summer–the spring semester has ended and the humidity is high. But we won’t let humidity get in the way of expressing our pride in our faculty and students. For your summer reading pleasure, three kudos: Prof. Jonathan’s Hsy’s book, Trading Tongues: Merchants, Multilingualism, and Medieval Literature (Ohio State University…