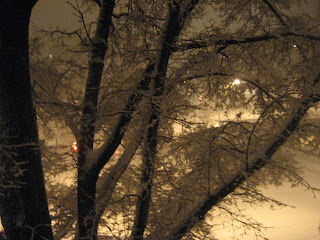 Well we know what the entire English Department was doing yesterday. Due to the 13 comments I got on the Facebook post yesterday asking for famous literary quotes about snow/despair I found myself googling like mad today to appease you all. So without further ado, here is what this week’s madness reminds you of:

English Dept GWU (this was either Jeffrey Cohen or Gayle Wald, the other tWo admins for our lovely little Facebook page) suggested Wallace Stevens “Thirteen Ways of Looking at a Blackbird”

Gowri Koneswaran would like to honor the late J.D. Salinger with this famous quote from The Catcher in the Rye

“I went over to my window and opened it and packed a snowball with my bare hands. The snow was very good for packing. I didn’t throw it at anything, though. I started to throw it. At a car that was parked across the street. But I changed my mind. The car looked so nice and white. Then I started to throw it at a hydrant, but that looked too nice and white, too. Finally I didn’t throw it at anything. All I did was close the window and walk around the room with the snowball, packing it harder. A little while later, I still had it with me when I and Brossard and Ackley got on the bus. The bus driver opened the doors and made me throw it out. I told him I wasn’t going to chuck it at anybody, but he wouldn’t believe me. People never believe you.”

Robert McRuer recalled Ohran Pamuk’s aptly titled novel Snow. He is also partial to “the scene in Jim Jarmusch’s Stranger Than Paradise where they look out at the blankness of Lake Erie and describe the snow as beautiful when it’s essentially just a white screen of nothingness.”

“These sights spoke of a stranger and powerful loneliness. It was as if he were in a place that the whole world had forgotten, as if it were snowing at the end of the world.”-Pamuk

Christopher Griffin (who started this fun) would like to contribute another quote to the blog. This time from James Joyce’s “The Dead.”

“Snow was general all over Ireland, . . . falling softly on all the living and the dead.”

Thanks to Simile1000 (whoever you are, we thank you) for this spectacular quote from Melville’s Moby Dick.

“Is it that by its indefiniteness it shadows forth the heartless voids and immensities of the universe, and thus stabs us from behind with the thought of annihilation, when beholding the white depths of the milky way? Or is it, that as in essence whiteness is not so much a color as the visible absence of color; and at the same time the concrete of all colors; is it for these reasons that there is such a dumb blankness, full of meaning, in a wide landscape of snows–a colorless, all-color of atheism from which we shrink? And when we consider that other theory of the natural philosophers, that all other earthly hues–every stately or lovely emblazoning–the sweet tinges of sunset skies and woods; yea, and the gilded velvets of butterflies, and the butterfly cheeks of young girls; all these are but subtile deceits, not actually inherent in substances, but only laid on from without; so that all deified Nature absolutely paints like the harlot, whose allurements cover nothing but the charnel-house within; and when we proceed further, and consider that the mystical cosmetic which produces every one of her hues, the great principle of light, for ever remains white or colorless in itself, and if operating without medium upon matter, would touch all objects, even tulips and roses, with its own blank tinge–pondering all this, the palsied universe lies before us a leper; and like wilful travellers in Lapland, who refuse to wear colored and coloring glasses upon their eyes, so the wretched infidel gazes himself blind at the monumental white shroud that wraps all the prospect around him. And of all these things the Albino whale was the symbol. Wonder ye then at the fiery hunt?“

And I will leave you with a fabulous Julia Alvarez quote from Snow mentioned by Hache Carillo.

“…Soon I picked up enough English to understand holocaust was in the air. Sister Zoe explained to a wide-eyed classroom what was happening in Cuba. Russian missiles were being assembled, trained supposedly on New York City. President Kennedy, looking worried too, was on the television at home, explaining we might have to go to war against the Communists. At school, we had air-raid drills: An ominous bell would go off and we’d file into the hall, fall to the floor, cover our heads with our coats, and imagine our hair falling out, the bones in our arms going soft. At home, Mami and my sisters and I said a rosary for world peace. I heard new vocabulary: nuclear bomb, radioactive fallout, bomb shelter. Sister Zoe explained how it would happen. She drew a picture of a mushroom on the blackboard and dotted a flurry of chalk marks for the dusty fallout that would kill us all.

The months grew cold, November, December. It was dark when I got up in the morning, frosty when I followed my breath to school. One morning, as I sat at my desk daydreaming out the window, I saw dots in the air like the ones Sister Zoe had drawn—random at first, then lots and lots. I shrieked, “Bomb! Bomb!” Sister Zoe jerked around, her full black skirt ballooning as she hurried to my side. A few girls began to cry.… See more

“Snow,” I repeated. I looked out the window warily. All my life I had heard about the white crystals that fell out of American skies in the winter. From my desk I watched the fine powder dust the sidewalk and parked cars below. Each flake was different, Sister Zoe had said, like a person, irreplaceable and beautiful. “

Thanks again! Hopefully we will be dug out soon!

Through the generosity of a GW donor, the English Department will hold a competition this spring for the best student poem. The contest will be open to all students, graduate and undergraduate, regardless of major. We will award this substantial prize annually for the next five years. So, get writing. [image from here] Share on…

Although we are at GW to learn, we must admit that student discounts are a huge benefit of being a college student. If you were interested in hearing Orhan Pamuk speak at the Smithsonian, but slightly worried about the ticket price, you can now attend because tickets will only be $10 for students! With this…

Check out the profile of English Prof. Kavita Daiya in the fall 2010 issue of The Asian Connection, the newsletter of the Sigur Center for Asian Studies, covering Spring and Summer 2010. Prof. Daiya’s research investigates questions of violence, displacement, and ethnic nationalism in South Asia. Her book Violent Belongings: Partition, Gender, and National Culture…

We will be offering a one credit, four evening course with our GW-British Council Writer in Residence Suhayl Saadi. You will have the chance to read three of his favorite novels and discuss them with him: Monsieur Shoushana’s Lemon Trees by Patricia Duncker; How Late It Was, How Late by James Kelman; and This Other…

From the latest edition of Research & Discovery: In an extraordinary seminar that started last fall, The George Washington University and the Folger Shakespeare Library, one of the world’s premier independent research institutions, are offering a book history course exclusively for GW undergraduates. The semester-long class is an unprecedented opportunity for senior humanities majors interested…