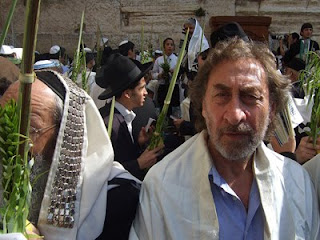 According to Howard Jacobson, being a British Jew is always a struggle. Especially when you arrive in Washington on the very last international flight to Dulles last Friday and then find yourself stuck in your hotel for six days. Jacobson joked he was beginning to wonder if GW even existed since all he had seen of DC was Trader Joe’s. But Thursday Jacobson did make it to GW and met our affable English department. After some cookies (or biscuits as the charmingly British Jacobson called them) were passed around Jacobson’s BIG READ was on.

As our writer in residence for February, Jacobson will lead a one-credit evening course, converse with various classes, and talk about his novel Kalooki Nights (KN) to Prof. Moskowitz’s Jewish Literature Live course. Because KN deals with Jewish themes and characters, the conversation was largely about Jewish identity, particularly in Britain.”You’re in hiding as an English Jew,” said Jacobson. He attributes this sense of not belonging to the English Jews’ expulsion from England in the Middle Ages. Today being an English Jew means creating a fine balance between being “an Englishman and still being Jewish.”

Jacobson takes on subjects that other British Jewish writers have avoided. He said, “Very few Jews have done what I’ve done–write about the Jewish experience. There are almost no ‘Jewish’ [English] novelists.” In England, Jacobson is frequently referred to as the British version of Philip Roth or Woody Allen, which he attributes to the fact that he’s just another Jewish man writing about his experiences. “I ran into Allen at a restaurant. When I told him I was called the British Woody Allen he apologized and said ‘I’ll buy you dinner.'” Jacobson says he would prefer readers think of him as the “love child of Roth and Jane Austen.” After all, his influences are quintessentially British: George Eliot, Charles Dickens, and of course Austen.

Many of these writers are much more dramatic than Jacobson initially started off as. An author of “comic romps,” Jacobson did not believe he had the license to write about tragedy for much of his early career. This changed after the death of his father. “When my father died I was given permission to write about tragedy,” he said. “His dying facilitated something in me.” Though Jacobson believed he could write something containing tragic elements, he did not realize KN would turn into the novel it did. The protagonist of the novel, Max Glickman, is the creator of a graphic novel Five Thousand Years of Bitterness, a work that details antisemitism, a topic Jacobson has always been fascinated with. “I have not seen actual brutal acts of antisemitism [growing up in Manchester, England]. But there is intellectual antisemitism in England partially due to Zionism and anti-Zionism,” he said. Jacobson is concerned with such antisemitism, but “the degree to which I am obsessed with it has surprised me.”

Perhaps Jacobson’s obsession may be in response to England’s “Jewish illness,” as he calls it. “I can call myself the Jewish Jane Austen until I’m blue in the face, but that doesn’t mean that Austenites will accept me,” he said. Jacobson likes discourse with those who disagree with him, though. He writes for the British newspaper the Independent (click here to find a recent column on Snowmageddon that he wrote), not a newspaper one would expect for Jacobson’s writing. He said, “I write to people not who already agree with me, but those who do not.”

That is not to say that all Jews agree with him either. Jacobson will openly debate what it means to be “Jewish.” “I do not go to the synagogue or be careful with what I eat, but I have Jewish thoughts and my Jewish thoughts are more Jewish than you not eating a bacon sandwich,” he said half jokingly, comparing himself to more observant Jews. What does “thinking” Jewish mean, however? Jacobson emphasizes the Jewish joke. He said, “The Jewish joke controls pain. It’s a safety valve. It’s always got to be smart, but it can be too smart. It poses as a self punishment, but it can achieve a victory of sorts.” In some sense, Jacobson views his novels as extended Jewish jokes. After all, “Judaism is an endless argument, that’s why we write novels,” he said.

Who reads his novels? To be honest, not as many Jewish readers as Jacobson would like, but that does not stop him from writing about Jewish subjects. “For a writer, [Jewish experience] is a fantastic subject,” he said. How does writing a novel that combines comedy and the Holocaust work, though? “For me, comedy is not light. How can you have comedy and the Holocaust together? You can, you have to,” he said. In its essence, this quote from the Big Read may best describes Jacobson. “The comedy I like is where you smell blood. Where if you don’t laugh, you scream. It’s survival comedy,” he said.

As you plan your end of the year giving, we hope that you will keep the GW English Department in mind. Here is some of the faculty research that the generosity of our supporters fosters: Jonathan Gil Harris ·       Shakespeare and Literary Theory (Oxford University Press) to be published in May 2010. Editing collection of essays…

JEWISH LITERATURE LIVE A few years ago Ariel Sabar quit his day job as an award winning journalist in order to work on a book. The shift from journalism to book writing was a challenge, but even more challenging was the subject of his book My Father’s Paradise, his father and his father’s history as…

The GW English Department is happy to announce a new five year program in which majors can earn both a bachelor and a masters of arts. Open to our best undergraduates, the BA/MA program enables students enrolled in the department’s honors program to take graduate coursework in the senior year. Students apply into the BA/MA…

Brian Becker, one of my favorite former students, writes: I came to Chicago directly after graduation to get an MA in Humanities from the University of Chicago, which wrapped up in 2006, and have since been working in a number of capacities for The Princeton Review–most recently as a trainer of incoming teachers for the…

By special arrangement with the folks organizing Toni Morrison’s upcoming campus visit (thank you, Prof. Evelyn Schreiber!), the English department has obtained several seats for undergraduates to attend a dinner with Prof. Morrison before her talk at Lisner Auditorium on Monday 9/21 at 8 p.m. This dinner is by invitation only and is for fewer…

Kwame Alexander’s And Then You KnowNew and Selected Poems at Gelman Library’s Special Collections Research CenterPoetry Reading and Reception On April 9 from 7 PM to 9 PM, the Special Collections Research Center of the Gelman Library invites the community to a poetry reading and reception celebrating the publication of Washington poet Kwame Alexander‘s And…