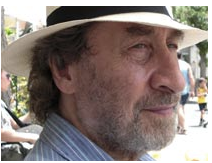 Here is a photograph of acclaimed British writer and public intellectual Howard Jacobson in warmer climes. Howard has been “in residence” since Monday, but the weather gods seem intent on making it impossible for us to hold any classes with him.

But we will not be cowed by Snowpocalypse 2010. We are stronger than that.

Show your love for the English Department, your support for and interest in Howard Jacobson, and your refusal to give in to snow-day #4 lethargy and loneliness by attending our BIG READ event tomorrow, February 11. It will be from 1-3 p.m. in Rome 771. (That’s several hours earlier than we had originally planned.)

This is a B.Y.O.H.C. (Bring Your Own Hot Chocolate) event. I’ll try to buy some treats for us from whatever grocery store is open along my slushy route to school, but if you want to bring your own treats to share, they would be most welcome.

This event is open to everyone, not only English majors. And you don’t have to have finished Jacobson’s wonderfully funny and poignant novel Kalooki Nights to attend. Do you think we can fill Rome 771?

Two faculty members and a student helped us to raise more than two thousand dollars in the last cycle. The money will help with a readings series and with undergraduate and graduate students research projects. We deeply appreciate the generosity of: Natalie Carter (student) David McAleavey (faculty) Tara Wallace (faculty) If you have not contributed…

Kathleen Rooney, a GW alumnus, has just released a new book of poetry!Here is some information about her newest publication:“Oneiromance (an epithalamion) gives the marriage poem a case of vertigo, displacing while embracing the panoply of possibility when two people attempt to forge a life together. Kathleen Rooney creates a dream-state with fluid borders and…

The faculty of the department of English wish you the best of luck as you work on your final papers and examinations. Share on FacebookTweet