Two Shakespeare Courses in Spring on Film and Race 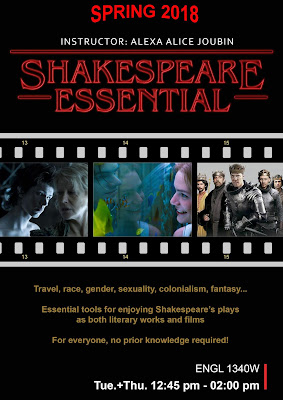 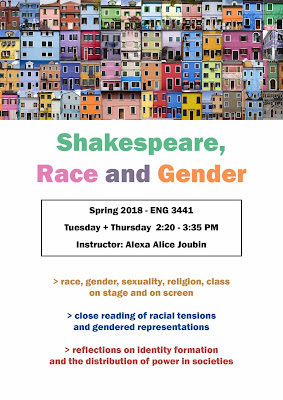 Come sharpen your skills of analyzing canonical stories the society tells about itself. The world is made up of stories. Stories full of sound and fury. Great stories are often strangers at home. One of the greatest storytellers is Shakespeare. His plays defamiliarize banal experiences and everyday utterances while offering something recognizable through a new language and form. These stories connect us to other times and places.
In spring 2018, the English department will offer ENGLISH 1340W Essential Shakespeare and ENGLISH 3441 Shakespeare, Race, and Gender, both taught by Alexa Alice Joubin.
ENG 1340W Essential Shakespeare
Spring 2018, Tuesday and Thursday 12:45-2::00 pm
This general education course introduces you to the riches and beauty of the world of Shakespeare’s comedies, tragedies, and histories. It is designed for everyone, and no prior knowledge is required. We will explore how Shakespeare and his company represented racial, cultural, and gender differences through travel, colonialism, and fantasy. As we identify key components of Shakespeare’s work, you will acquire essential tools for enjoying Shakespeare’s plays as both literary works and films.
The course emphasizes performances of Shakespeare on screen. Shakespeare’s plays have been adapted for the cinema since 1899 in multiple film genres, including silent film, film noire, Western, theatrical film, and Hollywood films. This course examines Shakespeare’s romance plays, histories, tragedies, and comedies and their adaptations on screen.
ENG 3441 Shakespeare, Race, and Gender
Spring 2018, Tuesday and Thursday 2:20-3:35 pm
This seminar will explore how the early modern and modern ideologies about race, gender, class, religion and sexuality shape Shakespeare’s plays and their afterlife on stage and on screen. You can hone your skills of close reading and evidence-based argumentation. You will also be able to connect critical analysis of historical texts to your professional life beyond the classroom.

Screening Shakespeare (ENGL 6260) Monday, 4:10-6:00 pm Professor Alexa Alice Joubin Fall 2017 Semester Shakespeare has been screened–projected on the silver screen and filtered by various ideologies—since 1899. What critical resources might we bring to the task of interpreting performances on film, television, in digital video, and as filmed theatre pieces? This seminar examines the adaptation…

Faulkner and Morrison:  Race, Memory, and Aesthetics ENGL 3820W (CRN 15624) Professor Evelyn Schreiber Tuesday/Thursday 12:45-2:00 PM This exciting Fall 2016 course will comprehensively examine the works of two renowned and integral American authors, William Faulkner and Toni Morrison, linking their fictional and discursive practices and analyzing how their works and ideologies reflect on each…

This Dean’s seminar takes advantage of the theater offerings in Washington and asks the question:  What is new about new plays?  Are contemporary playwrights reworking classical themes or are their works entirely new entities?  What themes reappear and how are they presented?  The course also considers how classical plays are re-imagined for modern audiences. …

“For lessons in literature,” GW Today reminds readers, “George Washington University students do not have to rely on just books—they can meet authors in person through the English Department’s campus lecture series and public readings this semester. Several writers will come to campus through the Jenny McKean Moore Reading Series, led by Lisa Page, acting…