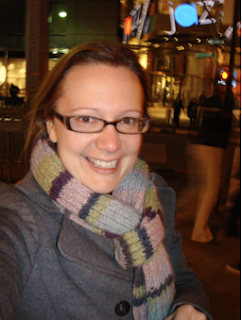 This just in from Prof. Holly Dugan, describing her fascinating summer 2010 English course:

This summer, I’ll be teaching a course on early English drama that culminates with a week abroad, exploring Edinburgh, Scotland and Yorkshire, England and watching the 2010 production of the York mystery plays. I’m writing here in the hopes that I might inspire you to join me in endeavor! Medieval drama may not be high on your list of summer plans, but my aim here is to change that. At the very least, I hope to inspire you to consider taking my medieval drama course next fall.

I often joking refer to the course as “the craziest plays you’ve never read.” Most of us have had some exposure to early English drama through the works of Shakespeare but know almost nothing about their historical predecessors, except that they are “religious.” While it’s true that all of the plays on the syllabus operate within a medieval Catholic
worldview, the religion they perform is surprising to our modern perspective.

The Digby Mary Magdalene play, for example, includes a same-sex kiss between the Magdalene and “Lady Lechery” in staging the saint’s sinful past. The “Crucifixion” scene at the apex of the York mystery cycle involves physical comedy that would rival the Marx brothers. The three university coeds—Mischief, Nought, and New Guise—in Mankind have a moral code straight out of one of MTV’s reality shows. And the irony of the Second Shepherds’ Play, where a shepherd and his wife try to pass off a lamb as a miraculous child on Christmas Eve (of all nights), seems downright blasphemous. There are moments of profound sorrow, such as in the Wakefield Abraham and Isaac, when Abraham contemplates sacrificing his son for his faith, and profound horror, such as the mass infanticide in the Slaughter of the Innocents. And there are moments that vex and deeply trouble our critical perspective, such as the anti-Semitism of the Croxton Play of the Sacrament or the violence against women staged in the York Noah play. Under-read and definitely under-performed, these plays often falls out of our literary assessments of early English drama, yet they offer much to contradict and challenge our assumptions about life in the past.

During the summer of 2006, I had the good fortune to visit York during one of the two weekends when it staged a modern production of the city’s famous mystery cycle. I joined the crowd on the street, watching these 600-year-old-plays come to life in the modern city. The experience shaped how I thought about the plays; they seemed both historically distant and, yet, at the same time so very current, almost postmodern in their staging and humor, and so very linked to the urban space in which they were performed. Emerging from a culture, a language, and a nation that was very much in formation, these plays continue to ask important larger questions about community and identity for modern audiences. I returned to GWU determined to teach these plays in a way that captured the spirit of this production.

Using a host of contemp 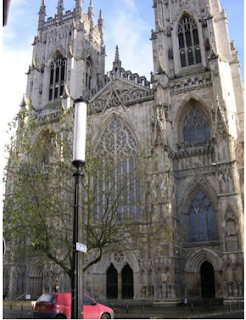 orary materials, including films (Evan Almighty, after all, is a modern Noah tale), television shows (an episode of Showtime’s This American Life that explores what happens to a small community when a Mormon painter relies on religious outsiders in Utah in order to paint realistic “bearded” apostles from life), and modern theater (a dvd from the 2006
York production), the course examines medieval drama as literary adaptation. For their final projects, students can choose between scholastic research or creative adaptation. Most choose the latter; I’ve read screenplays adapting the York cycle to an HBO miniseries on corporate corruption, adapting Wisdom to a film about transgendered experience, and adapting the Noah play to a rock-opera set in the 1960s.

Though the idea for this summer course stemmed from my travels in England, it was the work we do here in Rome Hall that inspired me to reframe it to include study abroad. Since 2006, we’ve revised our mission to include an emphasis on global and transnational texts; we’ve had famous authors muse on literature in a global age; provide us with a reading list and archive; muse on history and literature; and reflect on literature and the nation. We’ve watched our classrooms go live and expand to include both the archives of the Folger Shakespeare Library and the Queer and Transnational Film Studies Festival in the Czech Republic.

Inspired by these events, I hope to link our eclectic energy at GWU with the theatrical events in our broader literary world. This July, the city of York will once again stage the mystery cycle. If you’ve never had a chance to examine medieval drama closely (and I’m willing to wager a bet that most of you haven’t), this course is a rare opportunity to do so while also thinking through issues of literary adaptation and the role of theater history in modern productions. If you have studied medieval drama, I promise that it will seem fresh and new once we’re finished with it.

Hope to see you in York this July!

E.L. Doctorow will visit with students and then give a public reading Thursday. On April 7, the English Department will be hosting a reading by acclaimed writer E.L. Doctorow. The author of eleven novels, Doctorow has received numerous awards for his work, including the National Book Award, the National Book Critics Circle Award and the…

JEWISH LITERATURE LIVE It may seem hard to believe, but your beloved blogger (at least I hope I am beloved) was not always so studious and interested in books (read infiltrating the English department). Back in the day, I was just another five year old who could not recite the alphabet or tie her shoes….

by J J Cohen So you may have heard that the DC area has gone a bit overboard in prepping for the Inauguration and its attendant hoopla. All bridges to Virginia, for example, will be closed — apparently to prevent Karl Rove from leaving his home in Arlington and mingling with the multitudes. I am…

Our class of M.A. students. As good-looking as they are brainy. Last week, the English department celebrated the achievements of our graduates with a Ph.D. hooding ceremony, a reception for MA and PhD students, a party for graduating seniors, and, of course, the Columbian College Celebration and Commencement. This year, 12 students earned Departmental Honors…

It is with great sorrow that we note the sudden death of Jonathon Lucks, an alumnus of the English Department (class of 2006). He is fondly remembered by our faculty, as well as by those majors who took classes in the department with him. We offer our deepest sympathy to his family and to his…