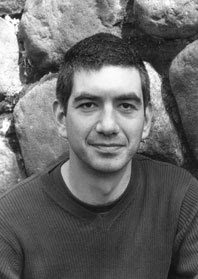 There is a running joke in Jewish Literature Live that despite the course title no author will admit they are a Jewish writer. Typically most authors frown when posed the question of authorship and spend the next five minutes refuting the Jewish label. However yesterday’s afternoon with Gabriel Brownstein marked a turning point in the course. Brownstein lit up when asked the fundamental question, “Are you a Jewish writer?” “It’s a very good question. I like that question. It’s a very Jewish question. Judaism was the in for me,” he said.

The protagonist of Brownstein’s fascinating and fun novel The Man from Beyond, Molly Goodman, is a young Jewish newspaper reporter in New York City in the 1920s working on a story about the feud between Arthur Conan Doyle and Harry Houdini over spiritualism. Naturally the story of the friendship between the two men was a goldmine for fiction, but how to approach this story was another question. Brownstein admitted that the first draft of the novel did not even include Molly, but soon she became a crucial element to explain the uncertain time period that was the 1920s. Writing a female protagonist was a stretch for Brownstein, who joked he is still a twelve year old boy at heart, but by making her Jewish, a world he knew, he was able to have a closer understanding of her. Brownstein noted that his protagonist needed to be, “put in the the most unstable time period, to put her in the most unstable time period she had to be a woman, and to be an assimilated Jewish woman- there’s no path for that,” he said. “There is nowhere for her, she was unmoored in the same way Houdini and Doyle were. The world was changing and there was no place for them.”

Brownstein found the process of writing historical fiction “complicated.” Yet when he stumbled upon the subject of the novel there was no turning back. “I was at a book sale in a church basement in Vermont and I saw a book with Houdini on it. I was totally transported by it. I was possessed.” There was no question that he write the novel. He said, “Writing a book is like falling in love, no one wants it to be but you. I had to write it.”

Brownstein found the most important way to get into the mindset of historical fiction is to get a sense of the physical world one is writing in. “You have to get the reader into a physical world and any kind of narrative world,” he said. He found himself exploring questions such as whether the streets were paved or cobblestone at the time or if there were street lights. In some cases, he could not even imagine that world. He said, “The idea of Doyle running down 5th Avenue after a taxi cab or that he would ride in an elevator was weird to me.” According to Brownstein the world changed more between 1910 and 1920 than it has in the past eighty years, which completely eradicated the world Doyle and Houdini knew. “These guys were before the invention of popular culture. It was vaudeville and short stories and suddenly they were in the world of popular culture,” he said.

Assimilation was key for Brownstein’s characters in order to remain relevant in society. “The question of spiritualism is related to Jewishness in terms of assimilation,” he said. However, in his case, Brownstein is almost too assimilated to understand how or why he is a Jewish author. “I do come from a Jewish world…There is always a fight in my family about Jewishness.” Overall Brownstein finds the question of spirituality and Judaism very “vexed.” However he does note a natural connection between the two. He said, “When I was a kid, Judaism was totally magical. It was like a wizard room with men with beards. I thought the Hebrew incantations were something beyond.” When Brownstein was fourteen he discovered Houdini was Jewish, originally named Eric Weisz. “A changed name is so Jewish. To change the name is hiding, but it’s like hiding to reveal,” he said.

On the contrary, Brownstein is not hiding anything. As a writer he fully invests himself in the world he is creating, Jewish or not. “I want to be in that world and to bring other people into that world is my fundamental goal as a writer,” he said.

When you talk to most professors in the English department they profess that reading became an obsessive hobby from an early age. However Ramola D could not stop at reading books, she had to write them too. “I couldn’t read for long without itching to put the book down and write my own stories and…