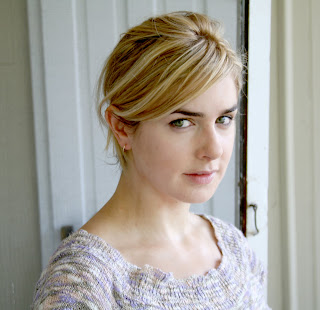 You may have seen Gina Welch running around the English Department offices in a pair of green heels. Or perhaps you caught her segment on MSNBC’s Morning Joe last Thursday discussing her new book In the Land of Believers. Maybe you saw her book featured when flipping through the current issue of Oprah’s magazine “O.” Or you just happen to be one of the lucky students taking a creative writing course of hers. Gina Welch is everywhere lately.

Interestingly enough, the woman whose book is now on prominent display at any bookstore was too intimidated by the English department as an undergraduate at Yale that she avoided the subject almost entirely. “I felt more comfortable with a history major because it is about receiving information not interpreting it like English,” she said. Welch now recognizes that her misconceptions about the English department were purely insecure. She said, “I feel like at that age I personally was so bound up in my own insecurities and my social anxieties. My priorities had not settled yet and I didn’t know who I was.”

Despite this lack of confidence, Welch took two creative writing courses as an undergraduate and completely fell in love with the subject. Her first foray into creative writing took place in a Yale seminar taught by Mark O’Donnell, a writer for “The Simpsons.” ” I was delighted with it. It refreshed this feeling I had as an adolescent in writing and telling stories,” she said. Although Welch is naturally drawn to entertaining, it was not until her second creative writing course that she really felt like she could turn this passion into a vocation. Welch’s advanced fiction course at Yale felt like an “invitation” into the writing world. She said, “I had always had this perception you were chosen for writing, which is foolish. There’s a lot of hubris you have to have to be a writer, the ‘I have a voice that needs to be heard’ idea.”

Welch found herself looking for more validation when she entered graduate school at University of Virginia for her creative writing MFA. Although validation may have been Welch’s initial goal, she ended up learning much more. “I got an ounce of validation and a heartier helping of criticism, rigor, a feeling that I had to work hard if I wanted to be good,” she said. “It wasn’t that I was chosen as a writer, I had to work hard my whole life.”

Despite her creative writing MFA, Welch’s first job after graduate school was not directly writing related. For a year Welch taught a woman’s studies class at UVA in conjunction with editing a feminist magazine called “Iris.” “I really loved it, but I missed writing. It was a business job,” she said. Then Welch had an idea for a book and got representation, starting a two year journey into the world of the Evangelical church.

After three years in Virginia, it was impossible to ignore the fact that Welch, an atheist since the age of six, was unlike most of the Evangelical Christian population. Growing up in the fairly secular environment of Berkeley, California led to almost a culture shock as she resided in Virginia. “To come from that environment to Virginia where Evangelical Christianity was the dominant force of the region confronted me with my own ignorance and my sneering superiority,” she said. The idea to write a book that delved into the Evangelical Christian church came to fruition after George W. Bush was reelected. She said, “It was the first time I realized what a political force they were and how mobilized they were. They get together in ways the left does not seem to match.” Since one fourth of the U.S. self-identifies as Evangelical Christians, Welch was certainly the minority in Virginia leading to her fascination. “There was something that seemed very imperialistic about it, but the Evangelicals I met in person were like you and me,” she said. So Welch set forth to go undercover in Lynchburg, Virginia to discover the truth behind the Evangelical church.

Going undercover was a daunting experience to say the least and very few people were aware of Welch’s project. “My family was concerned I was endangering myself. That I didn’t know how seductive religion was and there was the moral implication of lying to people,” she said. Welch’s close friends wanted gossip though. She said, “That sort of curiosity, the impulse to gossip, became a wedge for me. Once I started developing relationships I was less inclined.” It took Welch an entire year to build these relationships she describes. Her first year in the church was akin to learning a foreign language. “My religious background is different, my politics are different, my region is different, and I had a different accent. There is a whole vernacular of belief I had to learn, ” she said.

However once Welch finally figured out how the church worked, she was in too deep. There were a lot of moral issues with going undercover into a faith that Welch still wrestles with. “I was lying about what I believed and presenting myself as a Christian when I wasn’t,” she said. Eventually staying undercover was nearly impossible. “I had sort of a blithe willingness to mislead people about who I was…I didn’t realize the depth of it and wasn’t sensitive enough to regard them with true empathy. I had to grow, I was forced to grow,” she said. “Once I developed I started to realize how reckless I was being and had to leave.”

The process of leaving the church was traumatic for Welch. “I knew that leaving would be the beginning of the reveal for what I’d done. I knew I was going to be accountable for all the lies I’d told,” she said. “It made me feel like I had been a bad person.” This inherent “wickedness” Welch felt, made writing the actual book difficult for a long time. Welch was forced to write about those she had befriended. “I had been taking notes without their knowledge and writing about them without their knowledge.” It took Welch a full six months to seriously start writing the book. In May of 2008 Welch had a finished draft and with multiple overhauls and edits the book is now published and being sold and discussed everywhere.

Of course Welch is doing a whirlwind of interviews right now. You can read her at the Huffington Post, The Kalamazoo Opinion, and Statesman.com. Welch’s website, with links to her blog and more information on her book, can be found here. Also Welch will be having a reading at Politics and Prose this Saturday at 1pm. And please come to her reading with Romola D, which has been moved from this Thursday to April 21th at 7pm in the Marvin Center 310.

Two faculty members and a student helped us to raise more than two thousand dollars in the last cycle. The money will help with a readings series and with undergraduate and graduate students research projects. We deeply appreciate the generosity of: Natalie Carter (student) David McAleavey (faculty) Tara Wallace (faculty) If you have not contributed…

The Fat Studies Reader, a collection of essays to which GW English graduate student Julia McCrossin contributed a piece, was mentioned in a recent New Yorker article: So what’s wrong with putting on an extra pound, or ten pounds, or, for that matter, a hundred and ten? According to the contributors to “The Fat Studies…

Professor Robert McRuer recently won the Alan Bray Memorial Book Award for his book Crip Theory: Cultural Signs of Queerness and Disability. Since Prof. McRuer began to further his unique research in the combined fields of queer and disabilities studies, he has also edited an anthology, taught at GW, and continued to develop his ideas….