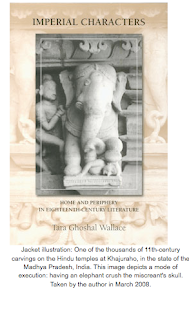 During the long eighteenth century, Britain won and lost an empire in North America while consolidating its hegemony on the Indian subcontinent. The idea of imperial Britain became an essential piece of national self-definition, so that to be British was to be a citizen of an imperial power. The British literary imagination inevitably participated in the formulation and interrogation of this new national character, examining in fiction empire’s effects on the world at home.

Imperial Characters traces a range of literary articulations of how British national character is formed, changed, and distorted by Britain’s imperial project. Looking at texts from Aphra Behn’s early description of seventeenth-century colonists in Surinam to Robert Louis Stevenson’s historical narrative about eighteenth-century Scotsmen roaming the globe, Prof. Wallace shows how these works enact “the opportunities, disruptions, and dangers of imperial adventurism.”

[x-posted from In the Middle] The saddest piece of our job as professors involves the number of farewells that teaching requires. Just when you’ve grown fond of a student, just when you think This person has really grown intellectually, is astoundingly smart, is becoming someone wonderful — this is a person I could converse with…

From the blog Online Learning Insights Prof. Margaret Soltan, known to students as a teacher of Don DeLillo, postmodernism, and aesthetics, is the first GW professor to participate in a MOOC (Massive Online Open Course). Now her work with Udemy.com has been featured in the Chronicle of Higher Education. Read about Prof. Soltan’s poetry course–which…

“A few years ago the fund endowed the Jenny McKean Moore Writer-in-Washington to perpetuity. As long as there are creative writing classes at this university, our students and faculty will be able to profit from the presence on campus of writers like the one we showcase tonight.” -Prof. Faye Moskowitz, in opening the 2002-2003 JMM…