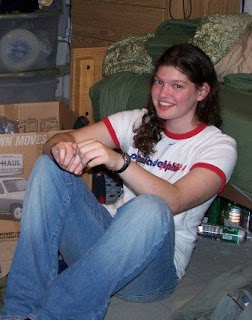 Gardening. What does the word mean to you? Perhaps new blossoms every spring or dirt underneath your fingernails. For most, the hobby of gardening is just that, a hobby. Maybe every so often a gardener will introduce home-grown vegetables into a family dinner, but mostly it’s a personal activity. Gardening as a food movement? Now, that’s another story, and a story that recent GW graduate Samantha Barry has found herself enamored of in the past year.

It all started with a simple discussion about Barry’s future with English Professor Gayle Wald. The two sat down and talked about everything from internships to graduate school, but it was not until Wald mentioned sustainable farming internships that Barry became interested. After reading an article by Michael Pollan, “Farmer in Chief,” which discusses the positive influence a national garden could have, like the one the Obamas tend, Barry was fully committed. “I loved the idea, and hoped for some way to carry out the advancement of food gardens on a nationwide scale,” she said. “When the Luther Rice and George Gamow Research Fellowship applications came up, I knew I wanted to research this movement, past and present. It gave me a chance to put my English major research skills to use in a politicized context.” 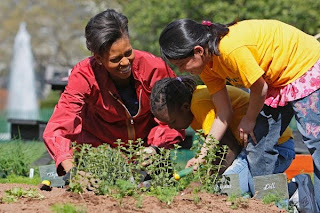 Barry was awarded the Luther Rice Research Grant to research and trace the history of the victory garden. The original victory garden was a staple of WWII, when gardens were intended to allow Americans to feed themselves and send more food overseas. However, just because WWII ended did not mean the victory garden ended; only the reasoning behind it did. Barry said, “People consider the ‘victory’ in today’s victory gardens in the framework of ‘battles’ against obesity, pesticide use, tightening family budgets, and the environmentally hazardous food mile.” This is what Barry is really interested in, how the victory garden is still significant today. She hopes to find, “The many justifications for the reemergence of the victory garden movement at the present time, as well as examine the rhetoric that enabled the victory garden to survive throughout the 20th and into the 21st century,” said Barry.

Barry starting researching this past summer and soon realized just how gigantic and fascinating a topic such as this was. “The war garden, liberty garden, recession garden – the politicized American food garden is somewhat of a shape-shifter, adapting to contemporary trends and crises,” she said. Some of her most basic sources are news articles from contemporary sources as well as ProQuest Historal Newspapers. Of course, she found local libraries essential, unearthing information in both Gelman Library and the Library of Congress. Even a medical research database, PubMed was useful in procuring information about the potential healthy effects of gardening.

Not all of Barry’s research was in the library system though. “I interviewed a gardening historian, an agricultural economist, a modern-day victory garden activist, and even gardening radio and TV hosts,” she said. “I had the most fun interviewing Paul James, ‘The Gardener Guy’ from HGTV, whose show I had watched since childhood.” Just as most of her research was easily accessibly, so Barry had no problem reaching out to these specialists, who were all eager to discuss what gardening could do for America.

So after a basic meeting with a professor turned into a full blown research project, what is Barry to do next? At first she hoped to write a book. “That project is just as daunting as it sounds, so I’m distilling much of my present work into article form, hopefully for publication,” she said. Barry sees her future in more than just gardening and is currently applying to several English Ph.D programs for next fall. She said, “My focus, if accepted, will be on relationships between people and their physical environments within U.S. Latina/o literature.”

No matter where Barry ends up it is clear she will have an exciting future. For now though, she does have one short term goal. “I also hope to become more personally involved in the victory garden movement with the planting of my own food garden this spring,” she said. “And with money left over from my fellowship fund, I hope to somehow facilitate the planting of more food gardens in Washington, D.C., perhaps through an existing D.C. nonprofit.” We applaud her work and look forward to seeing gardens around DC!

A packed crowd listens to Jane Bennett’s keynote address at the recent GW MEMSI conference. GW MEMSI hosted an extraordinary conference March 11-12. “Animal, Vegetable, Mineral: Ethics and Objects in Early Modern and Medieval Periods” drew an amazing array of speakers to campus for lively discussion. Here is a wrap-up of the event by English…

2005 graduate Madhur Bansal provides the GW English blog with this biography: After graduating from GW in 2005, I served in the Americorps VISTA program for one year as a Development Assistant with a non-profit organization, South Asian Americans Leading Together (SAALT). SAALT’s mission is to increase civic participation among South Asian Americans and advocate…