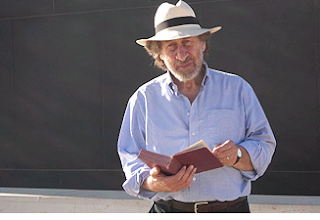 Last December, the English Department gave out 200 copies of Kalooki Nights, the challenging, sprawling, inspired, and ambitious 2006 novel by English writer Howard Jacobson, this year’s British Council UK Writer in Residence. Jacobson is a novelist, broadcaster, and journalist; London’s Independent, which publishes his weekly column, calls him an “acerbic cultural critic … known for his ebullient wit as well as his unique take on the Jewish experience in Britain.”

The English department is thrilled to have Howard with us for the month of February. And we want to celebrate with a BIG READ EVENT. Mark your calendars now for Thursday, February 11, 4-6 p.m. We’ll be gathering in Rome 771, the English Department conference room, for an afternoon of lively give-and-take with Harold and light refreshments. You don’t need to have completed Kalooki Nights to attend.
For those who snagged Kalooki Nights (and even for those of you who didn’t), this will be an opportunity to meet Jacobson in an intimate setting. Perhaps you can even get him to show you the rules of kalooki, a variation of the card game rummy.
Kalooki Nights is narrated retrospectively by Max Glickman, an English-Jewish cartoonist and author of the book Five Thousand Years of Bitterness, a graphic novel (though Max wouldn’t call it that) of Jewish persecution. Max is obsessed with all forms of Jew-phobia and anti-Semitism. He ponders what makes Jews Jews: Is it a history of shared victimhood? Is it a history of collective survival despite suffering? Does Jewish identity reside in Jewish practice or belief? Or something else? How do Jews negotiate a sense of “Jewishness” through their relations both with Jews and with non-Jews?
Max is particularly obsessed with the understanding the heinous crime committed by his childhood friend, Manny. In fact, he is drawn to Manny not only because of his transgressions but because for the secular Manny, Max, an observant Jew, is a kind of despised and desired Jewish “other.” This is a novel that explores Jewish identity through the twinned lenses of Jewish self-infatuation and Jewish self-loathing. It also treads on taboo ground by probing antisemitism in post-Shoah Britain.

In results that surprised everyone me, our poll has declared that the Hippo mascot will LIVE. One hundred and six votes were received, forty-two for execution and sixty-four for preservation. That means 60% of our blog readers like the pudgy beast. Even Obama didn’t win by that kind of margin. So … vive l’hippopotame! Now,…

On Friday, May 7 at 3 p.m., the University Seminar on 19th-Century British Histories will be gathering at the Corcoran for its last meeting of the academic year. The meeting will feature an illustrated talk by Prof. Barbara Gates (University of Delaware) titled “Of Fungi and Fables: Beatrix Potter and the Science of Storytelling.” The…