We are sure that you heard about the GW Distinguished Lecture in Literary and Cultural Studies with the amazing Rosemarie Garland-Thomson last night. There were posters all over campus. Virtually every blog post in the past month has mentioned it. Professor Cohen even threatened the GW English Department’s Facebook fans with this particular status, “What will we harangue you with when this event passes?” Although we would like to claim credit for your presence due to our publicity, we are sure it was really the brilliant Rosemarie Garland-Thomson that led to the packed ballroom last night.

As President Steven Knapp said after his introduction by Professor Cohen, “This event is a significant milestone in the growth of humanities research and scholarship.” It is true that the English Department has grown exponentially in the past year thanks to the Wang Endowed Fund in English Literature and Literary Studies, which sponsored last night’s event as well. Garland-Thomson would not have had such a wonderful introduction if it were not for another Wang Fund sponsored professor, José Muñoz.

Muñoz emphasized the significance of one particular phrase of Garland-Thomson’s to academic world, “Staring helps us arrive at a new encounter with the visual,” he said. Each word in this sentence shows how revolutionary Garland-Thomson has been to English literature by having us think about staring in terms of “encounters” and “visuals,” a field that is technically “new,” but has been anxious to break through for years. Muñoz concluded, “We should embrace staring as a way of knowing others and as a sign of hope,” he said.

Finally, Garland-Thomson took the stage and graciously acknowledged her three introductions and then proceeded to give a mind blowing talk that took us to the gas chambers of Nazi Germany and our own metro station at the same time. She uses these two modes of transportation to ask the following crucial question, “What circumstances produce lives understood to be worthy?” One world, the T4 gas chambers used to euthanize disabled people at first, only excluded people from society by deeming them “unworthy.” Another world, that of our own metro system provides universal accessibility. 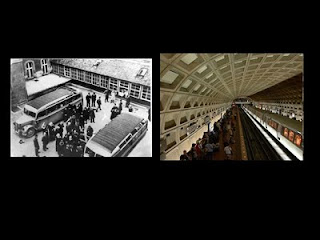 We live in a contradictory society as Garland-Thomson noted, “We integrate people with disabilities into the public world,” she said. “Yet medicine eliminates people with disabilities from the public world.” The later was exploited in Nazi Germany where the mass euthanasia of disabled people was considered granting a “mercy death.” This mercy death was only expedited by modern technology and transportation in 1941, where thousands of disabled people were easily able to ride on buses to their deaths. This event started the Holocaust essentially, yet a little over thirty years later an entirely different form of mass transit began.

The DC Metro is designed for everyone. “It was an inclusively built environment from the start,” said Garland-Thomson. Through escalators, stairs, lights for the deaf, paving for the blind, stability aids, multiple linguistics, and uniform design, the Metro is universal. Although a fierce debated ensued over whether elevators were really necessary, a decision was finally reached that separate, but equal was unacceptable thus making the Metro one of the most egalitarian transportation systems in theory. This allows for “self-determined mobility” a concept of Garland-Thomson’s that is crucial to public worthiness. She said, “The Metro is a built public sphere that builds better public citizenry, expanding the range of participating citizens. This is crucial for democracy.”

After Garland-Thomson’s talk many of us will probably never view the Metro in the same way again. This is the genius of her theory, she unearths theories that we all subconsciously were curious about, but never thought to ask about. Whenever a Garland-Thomson theory is presented we find some of our perspective on literature and life altered for the better. If Garland-Thomson’s talk is an indicator for the future of the humanities at GW, there will be a very bright future.

In February, GW English Professor Thomas Mallon’s new novel Watergate will be published by Pantheon. (Go here to pre-order your copy.) A historical novel that “conveys the drama and high comedy of the Nixon presidency through the urgent perspectives of seven characters we only thought we knew before now,” Watergate is a highly anticipated work–and the first…

The GW English Department is pleased to announce our first annual Student Poetry Contest. Anyone can enter, and the prize (generously donated by a departmental supporter) is an astonishing $500. RULES: Poems are judged anonymously. Students should submit one poem, no more than 200 lines long. A separate cover sheet should include the author’s name,…

Every year the English Department reports on its progress and achievements to the university. I thought readers of this blog might enjoy the glimpse it yields of the year that was. ————— CCAS Department Annual Report 2008-09ENGLISH IA Undergraduate studies * Majors, minors, double majorsMajors: 191 in English, 10 in English and Creative Writing; minors…

Our beloved colleague Maxine Clair is retiring. I’d like to share with you some comments from the student evaluations from her very last class. Professor Clair will be missed dearly. Each class with her is like a small step forward in my life as a student, and also a contribution to whatever I might achieve…

We’ve had many questions about whether Patrick Cook’s “Shakespeare on Film” (English 129) and Jonathan Hsy’s “Histories of the English Language” (179.11) count as pre-1800 courses for the major. The answer in both cases is YES, and both are terrific courses. Professor Cook’s class has long been offered and is a perennial student favorite. Professor…