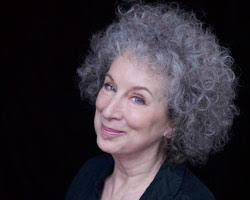 Margaret Atwood’s hair sticks out in all directions, almost as if each curl has some obscure thought attached to it. Most of those thoughts lead to award-winning novels, such as The Handmaid’s Tale, about a Utopian society gone dangerously wrong as they often do in literature. Atwood’s latest novel, The Year of the Flood, also features an ill-fated Utopia that blends an odd mix of the Garden of Adam and Eve and science. Another successful idea plucked from that crown of curls, however the book tour may not have faired as well.

Atwood is the author of dozens of novels, poems, and essays so obviously she has done the routine book tour too many times to count and was looking for something a bit different. Yet in this search for innovation, she also decided to completely detach herself from the process. Yes, Atwood is present at her events, such as the one held at Lisner Auditorium this past Friday, but until the Q&A period she was not as engaged.

The novel has three strong narrators, hymns (Atwood invents a complete religion, songs included), and general dramatic appeal so this translated to a dramatic reading by three GW students playing the three protagonists, with sporadic hymns sung by a chorus of GW students, and occasional narration from Atwood. Although GW’s talent was showcased with its three impressive actors and engaging choir, I could not help but feel a little perplexed as to how this was billed a “Margaret Atwood” event when the most she contributed was a few bits of sardonic wit throughout her narration. I did not seem to be the only confused audience member. The crowd anxiously checked their programs before the event started, asking each other what this event was supposed to be. It was said to be a dramatic reading on the ticket, but I think we all assumed this would only take up a fraction of the evening, not the entire evening.

What we really came to see was exhibited during the Q&A. What was most fascinating was her response to an intriguing question about what it is like to invent an entire religion. Atwood easily identified the importance of song, food restrictions (in her novel the religion advocates vegetarianism), and a leader (in this case a man calling himself Adam One) in various religions. By looking at religion from this angle, we were reminded why we need authors, to help turn our world inside out and examine everything.

Throughout this Q&A period, Atwood demonstrated her sarcastic humor and charisma. I believe we could have used a bit more of that during the event itself. Although the event was unique and certainly no fault of the performers, I will have to admit I am a bit old-fashioned and would take an author reading any day.

What does Cuba mean to you? To be entirely candid with you, my only experience with Cuba is its delicious cuisine. However, Cuba has always fascinated me with its rich cultural and political history. Last night’s reading with author and journalist, Mayra Montero only solidified that interest. As H.G. Carrillo emphasized in his warm introduction…

Professor Daiya on Mumbai, Migration and More Professor Kavita Daiya  I traveled to Mumbai (India) over the December holidays to continue my research: Mumbai as a city plays a central role in my current book in progress Peripheral Secularisms.  This work in part follows up on my first book Violent Belongings: Partition, Gender and National…

What do you think of when you hear the name, Michael Chabon? Comic books? Coming of age? Judaism? Pittsburgh? Movie adaptations? Chances are marijuana was probably not on that list. So when the lights dimmed in Lisner Auditorium this past Friday night and Chabon cracked the spine of his new collection of nonfiction essays, Manhood…

Professor McRuer in Mexico’s Museo Nacional de Antropología It’s hard to believe that it’s already mid-August and that classes at The George Washington University start one week from Monday.  Our faculty has been far and wide this summer and, indeed, you should watch this blog in the days ahead for news of all the projects…