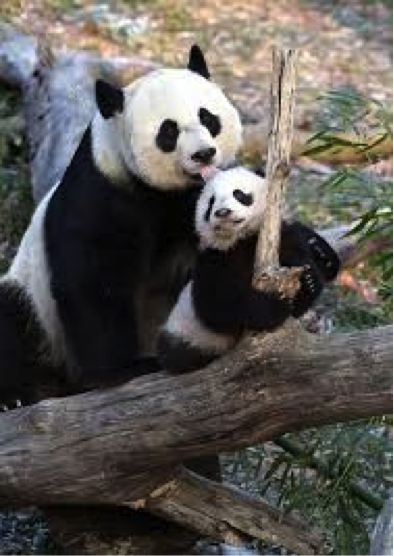 I first encountered Ogden Nash’s Giant Baby Panda poem settled like a gem in Marianne Moore’s 1944 essay “Feeling in Precision.” In the essay, Moore writes:
“Voltaire objected to those who said in enigmas what others had said naturally, and we agree; yet we must have the courage of our peculiarities. What would become of Ogden Nash, his benign vocabulary and fearless rhymes, if he wrote only in accordance with the principles set forth by our manuals of composition?
I love the Baby Giant Panda
I’d welcome one to my veranda.
I never worry, wondering maybe
Whether it isn’t Giant Baby;
I leave such matters to the scientists—
The Giant Baby—and Baby Giantists.
I simply want a veranda, and a
Giant Baby Giant Panda.

This, it seems to me, is not so far removed from George Wither’s motto: “I grow and wither both together.””

What immediately charmed me about this poem was the way it thwarts traditional analysis. This kind of literary subversion is, of course, par for the course with Nash, but (believe it or not) I’d never actually read an Ogden Nash poem before this one. We could ask what the panda poem means or what it’s about, but there’s no grand aphorism to be culled from the panda, nor is any particular story being told. Those means of assigning value to the poem are ultimately beside the point. We could say that this poem is about a person who loves baby pandas and would like to have one over to his veranda for a visit, but on closer inspection, the second to last line suggests that this speaker doesn’t even have a veranda in the first place. If anything at all, this poem is simply about the fact that the word panda rhymes with the word veranda, which is a delightful observation.
Insofar as it exists for the sake of reveling in sound play, Nash’s poem is a right, welcoming choice for Moore in her discussion of enigma versus “the courage of our peculiarities.” Moore locates Nash’s peculiar courage in his “fearless rhymes.” I still wonder whether Moore meant to say that our peculiarities give us courage or that it takes courage to express our peculiarities to the world, undisguised by enigma. Either way, Nash’s “Giant Baby Giant Panda” fits the bill.
—Thea Brown

Digging Between my finger and my thumb The squat pen rests; snug as a gun. Under my window, a clean rasping sound When the spade sinks into gravelly ground: My father, digging. I look down Till his straining rump among the flowerbeds Bends low, comes up twenty years away Stooping in rhythm through potato drills…

David McAleavey and Witi Ihimaera As the semester begins, the English Department Blog is happy to revive its “On the Road” series, occasional short pieces detailing the comings and goings of our illustrious faculty.  As this photo shows, Professor David McAleavey got together with a former GW World Literature Fellow, the Maori writer Witi Ihimaera….

GW English Professor Ayanna Thompson The New York Times recently reported on Play On! a project sponsored by the Oregon Shakespeare Festival asking 36 playwrights from diverse backgrounds to translate the language of William Shakespeare into contemporary modern English.  Our own Professor Ayanna Thompson was one of the dramaturges for the project, working with playwright Mfoniso…

The Saved From cutting the nuts out of a bull calf’s bag with a Barlow, from laying case knives on a dress pattern, from running a trotline and baiting the hooks with gone liver, from mashing a tobacco worm into a green blot, from crimping dough at the piecrust edge, from whisking an egg, from…

WELCOME TO NATIONAL POETRY MONTH AT GWU ENGLISH! The first National Poetry Month was in April 1996 and was started by The Academy of American Poets as a month-long celebration of poems.  In April 1996, I was an undergraduate at the University of Chicago when my poetry professor, Elizabeth Alexander, tasked her students with creating…