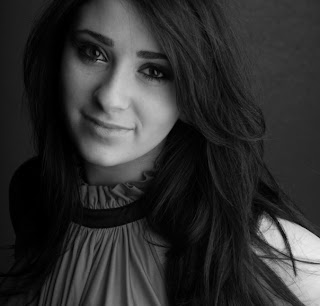 You may have seen senior Anya Firestone on the Dangerous Liaisons posters throughout campus a month ago. Or perhaps you have seen the fashionista in the flesh standing out in her heels and dress in a sea of flannel. However, this summer you will find Firestone in Paris, France. Firestone will be graduating this month, but the next she will be emulating her favorite expats as she works on a prestigious art grant from Parsons. The program is a six-week residency in Paris, where Firestone will have access to individual studios and the advice of curators, artists, designers, and writers. During the program she will work on her own mixed media art and attend lectures, visit museums, and finally have her and fellow students’ work showcased in the Parsons Paris Gallery. It is a dream come true for a girl who has loved art ever since she was a child and fell head over heels for Paris last year when she studied abroad there.

Firestone has been longing to return to her favorite city since she left last spring. As a junior, she used her time in Paris to fuse her Art History and English degrees together. One of Firestone’s proudest projects was her proposal to pair William Shakespeare’s Titus Adronicus with abstract art. She said, “Abstract art and Shakespeare are both difficult artistic realms to understand for many. People will say abstract art is silly and childlike and that Shakespeare’s language is dated and plots irrelevant. I thus proposed a project that allowed for a contemplative approach to understanding esoteric theater, language, and art in terms of one another: ‘performance art’ at its finest.” Even though she had to take a statistics course while abroad, Firestone synthesized it with her art as well. “I catered my Statistics project to art, recording data of 100 works from Sotheby’s Auction House. I yielded a formula through Data Desk’s statistical analysis program to determine the Hammers Price with Buyers Premium of a painting based on categories such as ‘genre’ and ‘size,'” she said. “When a painting was deemed an ‘outlier,’ I referred to its history in art to understand why this was so.” Firestone lives and breaths art, and is is clear that Paris is the quintessential city for her.

Firestone did not just find art in her classes while she was in Paris, but everywhere. “My favorite part of Paris is the feeling of being in it. I have created a life for myself bubbling with jobs, studies, and everyday strolls, so as to be endlessly consumed in a euphoric intoxication of beauty, an Eden of aesthetics,” she said. Part of that Eden of aesthetics is fashion. Firestone likens Paris to a Monet painting. “Looking at Monet’s waterlilies, their delicious purples and blues melting into a pond of paint, makes me want to reach into the canvas and grab them,” she said. “That is precisely what fashion allows us to do: to take Monet’s flowers and place them on our naked bodies—and voila, a dress! –to place them on our heads, dangle them from ears, tie them into a bow. That is fashion; when art escapes the frame and embraces the body. This is the feeling I get when I step into Paris, like stepping into the Monet or into the most magnificently crafted dress.” Firestone remembers walking through the cobbled streets of Paris, gazing into glamorous apartment windows, inhaling the sumptuous smell of pastries, and being surrounded by history and art. It is easy to understand why she could not resist this Parsons program. 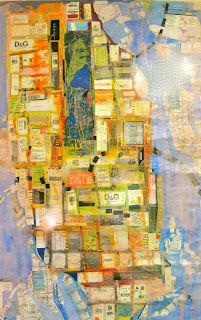 Firestone’s art will focus on Paris, a city that to her means literature, intellect, art, and fashion. As she proposed in her essay for the program, her project will “structure the overall blueprint of the city with the tags from garments I have collected over the past four years. I want to exemplify the importance of the city’s structure and layout, which in itself is a design to be marveled. I want to elicit a response in the spectator that mimics the feeling of being surrounded by the city, by being wholly wrapped in something beautiful. And through the use of tags, the evidence of my personal fashion, I will connect the aestheticism of the city to that of couture.” Of course, literature is also part of art and Firestone could not create something without invoking literature of some sort. Therefore, she also hopes to literally integrate pages of avorite works into her mural–works such as Gertrude Stein’s “Paris France” and Ranier Maria Rilke’s “Notebooks of Malte Laurids Brigge.” This symbiotic relationship between art and literature may seem obscure to some, but to Firestone art and literature have always complemented each other.

Growing up in New York, Firestone attended an Orthodox Jewish school and connects her ability to link art and literature together to her close study of the Torah. “I have been conditioned to locate patterns, make connections, and analytically think in a specific manner. I took this religious training and ran with it; now, I channel it not on a religious level but on an intellectual one through my studies in the arts,” she said. “I approach literature as I was trained to approach Biblical texts, in a scrutinizing and detail-oriented manner. And, I believe this same approach to understanding poetry or prose can be and should be applied to understanding the visual arts.” This means that she can connect David’s silence in the Bible to the negative space in a Rauschenberg painting. For Firestone, art and literature cannot be understood without each other. Her ability to find the relationship between both artistic mediums had also led her to find her life’s calling. She said, “My life’s thesis where there exists my self-proclaimed prophecy that is diaphanously clear: I am to reinstall an appreciation for art, to provide an inspiration to indulge in beauty, in an aesthetic hedonism confounded on creating, supporting, and treasuring the worth, the delicious delight of the sublime power of aesthetics.” 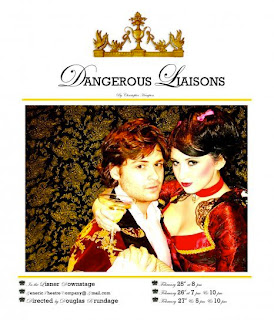 Firestone may be jetting off to Paris soon, but she must also give credit to GW for her helping her find her passion. After experiencing culture shock after spending her year abroad, Firestone found herself reconnecting with the college community through a production of Dangerous Liaisons. “The play was the perfect outlet to rid me of my Parisian melancholy because we created the most magnificent work of theatrical art in a pretend Paris,” she said. “My character was a woman in 18th-century France, philosophising about love and men, wearing big bows in her hair and French lace stockings, pink and gold Marie Antoinette stylized dresses, and poofy petticoats on a stage painted pink in pretend Paris.” Firestone will always look back at the experience as one of her favorite times at GW, a time when she was” living the dream, and doing so with the most incredible group of friends who are all dedicated to making art and creating the most memorable characters known to the stage.” We can only hope that Firestone continues to create art in all forms and inspire others to adore art as much as she does.

[Pictured above. Anya Firestone, the production of Dangerous Liaisons she acted in, two of her original art works]

Alumni, students, parents, faculty and friends generously support the GW English Department through their philanthropy. In amounts ranging from $5 to $30,000, these contributions enable us to have famous writers visit campus, support faculty and undergraduate research, hold special events, and enrich the study and teaching of the humanities at GW. We’d like to recognize…

With major reviews in the New York Times, the Washington Post, and elsewhere, it would be an understatement to say that Professor Thomas Mallon‘s latest novel, Watergate, is getting lots of attention.  On Wednesday, September 12, from 6-8 PM, a special event will be held for GW Alumni and others interested in hearing Professor Mallon read…